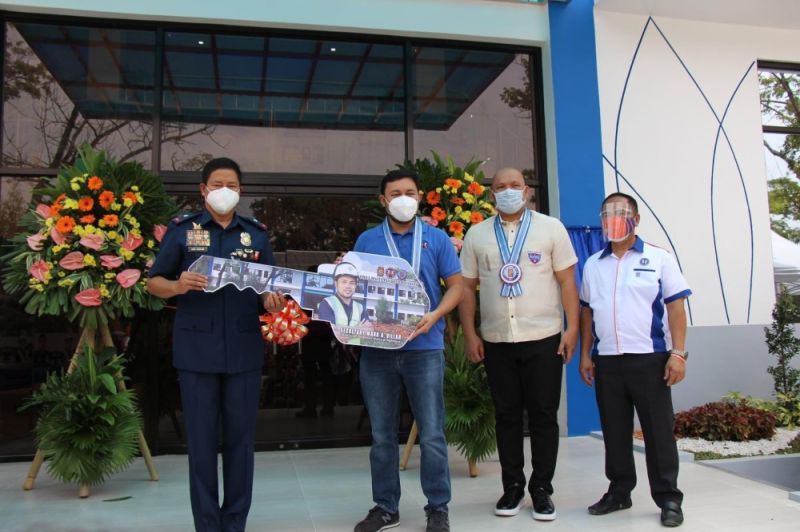 THE Department of Public Works and Highways (DPWH) and Philippine National Police (PNP) inaugurated on August 23 two brand new infrastructure facilities inside the Camp Olivas in the City of San Fernando.

The projects, which were implemented by the DPWH 1st District Engineering Office, include the construction of the two-story multi-purpose building, and cementing and upgrading of the local access road.

The multi-purpose facility, which amounted to some P37.4 million, replaced the old Rektang Konek Aksyon Agad building, which was razed by fire in July 2020.

De Leon said the new construction of the new building was very timely, as it will allow safe distancing among participants of meetings that are being held inside the camp.

"This facility will let us save time and resources because of instead of holding meetings in several batches, we can now cater to more participants because we now have a spacious and well-ventilated venue," he said.

Also, aside from the multi-purpose hall, the P24.98-million local access road with an embankment length of 50-lineal meters was inaugurated and turned over to the police force.

The said road network with drainage is the solution to perennial flooding problem in the police camp, which hampered its services for years, said De Leon.

He likewise expressed gratitude to Villar for his continued support to the Central Luzon policemen through various infrastructure projects.

"This will surely boost the morale of our people who are really putting their lives at risk to do our mandate of serving and protecting the public," De Leon said.

Villar, for his part, said the two infrastructure projects are funded through the Tatag ng Imprastraktura para sa Kapayapaan at Seguridad (Tikas) program of the DPWH and Department of National Defense.

"This is part of the many infrastructure projects implemented through our convergence program with PNP. Since we started, we have constructed around P15-billion worth of projects in various police and military camps across the country," he said.

He said more projects are currently being implemented and are in the pipeline, all with an aim of empowering law enforcers and military personnel of the country.

"We are trying to provide what our uniformed servicemen needs not only for their convenience, but more so we can improve the level of public safety in the country. In Central Luzon, we were already able to construct several administrative buildings, quarantine facilities, road networks, training centers, living quarters and many more through this program," Villar said.

He also assured Central Luzon cops that he will personally continue to promote the welfare of policemen even after his stint as DPWH head.

A P23.6-million Regional Crime Laboratory will also rise soon inside the PNP regional headquarters, which is expected to help in the prompt and proper examination of pieces of evidence from criminal cases.