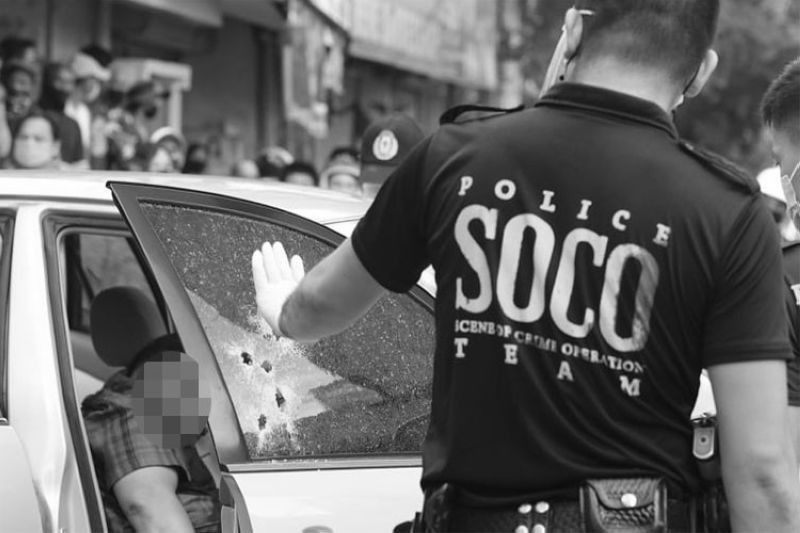 CEBU. A member of the Soco team arrives to investigate the killing of lawyer Rex JMA Fernandez on Aug. 26, 2021. (SunStar File)

THE Supreme Court (SC) committee on human rights on Friday, Aug. 27, 2021, asked the police and other organizations to submit their reports and findings on the killing of Cebuano lawyer Rex JMA Fernandez by the end of September 2021.

Associate Justice Marvic Leonen, who chairs the committee, said these will be among the records and reports that the committee will analyze to determine whether there are patterns in the killing of lawyers.

Fernandez was the first lawyer in Cebu who was killed after the SC, in a rare move on March 23, 2021, issued a statement seeking relevant and vetted information on each and every threat against or killing of a lawyer or judge within the past 10 years.

The collation of such information was among the five courses of action that the court said it was taking to determine what changes need to be made to address the assault on the judiciary.

"Based on the information provided, the court will then decide on the next courses of action, including the amendment of the relevant rules, or if necessary, the creation of new ones," the SC stated.

In his statement Friday, Leonen said the committee’s findings will form the basis for a “strategic response” that will be proposed for action of the court en banc.

“The killing of any lawyer is of serious concern to all of us. Violence solves nothing. It is anathema to the rule of law,” Leonen said, quoting the court en banc.

Fernandez was gunned down in a daylight attack in Banawa, Cebu City on Aug. 26. His driver was wounded while a woman seated in the back of the car was unharmed.

Fernandez was on the front passenger seat of his car, which had slowed down as it emerged from Good Shepherd Road, when the gunman walked toward the car and fired multiple shots through the passenger side window. The gunman then briskly walked away and hopped on a motorcyce driven by an accomplice.

Fernandez was the eighth lawyer slain in Cebu since July 1, 2016, according to the National Union of Peoples' Lawyers (NUPL). Nationwide, 57 lawyers, prosecutors and judges have been killed in the same period.

The Cebu City Police Office said it will form a special investigation task group (SITG) to investigate the killing of Fernandez.

Police Col. Josefino Ligan, CCPO director, said the killer was believed to be a professional gun for hire. He was optimistic that the SITG would be able to identify the gunman, although the latter was wearing a surgical face mask.

"At least we were able to see the gunman through the CCTV (closed circuit television). We'll just have to ask the people who were there at the time to describe the gunman so we can do a facial composite and estimate his height," Ligan said.

He said the SITG was examining other CCTV footage to retrace the steps of the gunman and his accomplice as well as determine their destination.

The police will also find out the purpose for Fernandez's visit to the area. Ligan said the woman who was also in the car should be able to shed light on this.

Ligan also said they will look into a previous social media post, wherein Fernandez named some personalities who allegedly should be blamed for anything that might happen to him.

Initially, Ligan said they believed the killing was work-related, but he assured that they will look into all angles.

The National Bureau of Investigation (NBI) 7 said it will also assist in the investigation.

"In fact, our agents yesterday went to the crime scene to gather information after we were informed that there was an ambush," NBI 7 Director Rennan Augustus Oliva said.

He said they will be talking with the driver and the woman who were with Fernandez.

"I hope and pray that the survivors would be able to help," Oliva said.

A parallel investigation was also launched by the Commission on Human Rights (CHR) 7 Friday.

Lawyer Arvin Odron, CHR 7 director, said Fernandez was not only a legal practitioner, but was also a human rights advocate.

In a statement, the alliance said Fernandez encouraged them to unite and fight against the threats of demolition and eviction. He also advocated the scrapping of the joint venture agreement (JVA) between Megawide and the Cebu City Government.

Fernandez was at the Hall of Justice in Qimonda Bldg. on Aug. 25, when the alliance filed a complaint against Cebu City and Megawide officials. (SunStar Philippines, AYB, WBS, JJL)
< Previous PageNext Page >