When will the Covid-19 pandemic end? 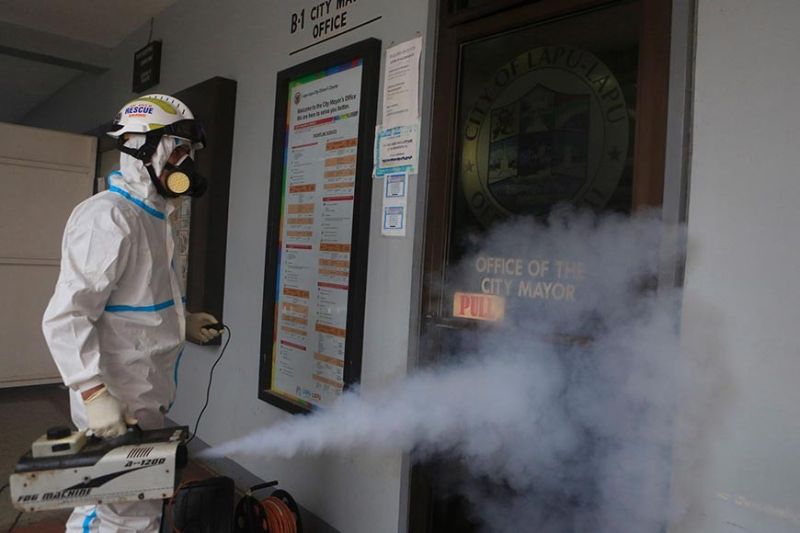 SECOND YEAR. A man disinfects the mayor’s office in Lapu-Lapu City, Cebu on Aug. 26, 2021. Work was suspended at the Lapu-Lapu City Hall after 15 employees tested positive for Covid-19. Men in protective suits have become a common sight as the Covid-19 pandemic drags on well into its second year. / ALAN TANGCAWAN 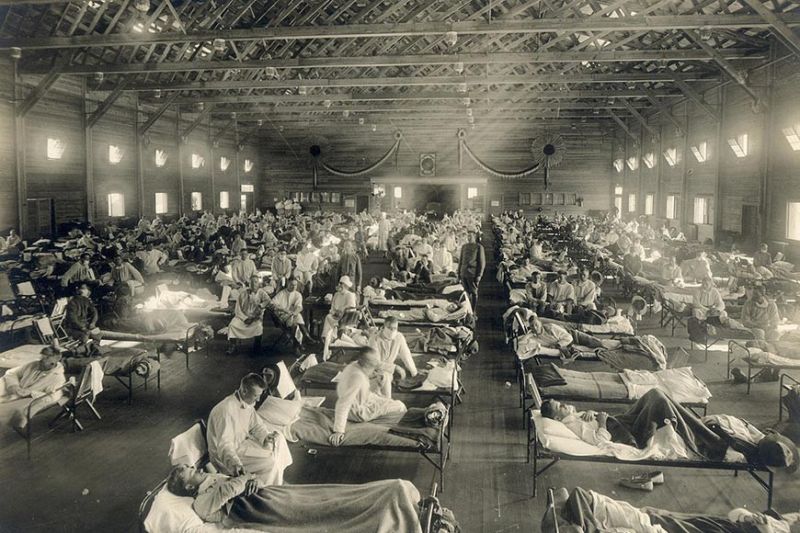 SOLDIERS DOWN. Soldiers from Fort Riley, Kansas, ill with the Spanish flu, fill an emergency hospital at Camp Funston in Kansas, USA amid the Spanish flu pandemic in 1918. The flu struck during World War I and was transported across the globe on troop ships. / NATIONAL MUSEUM OF HEALTH AND MEDICINE 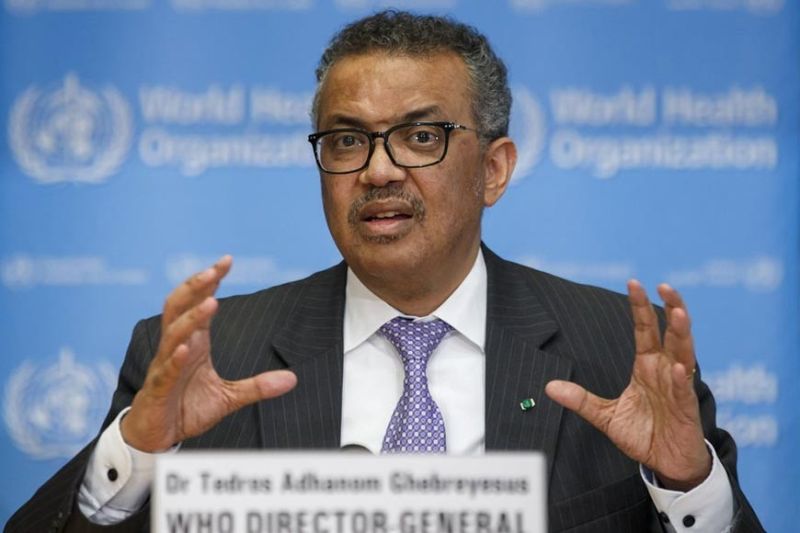 OUR CHOICE. “The pandemic will end when the world chooses to end it. It’s in our hands. We have all the tools we need,” says World Health Organization Director-General Dr. Tedros Adhanom Ghebreyesus (shown here in 2020) at a July 30, 2021 media briefing. / AP

NEARLY 20 months since Sars-CoV-2, the virus that causes coronavirus disease (Covid-19), was first reported in China on Dec. 31, 2019, there still seems to be no end in sight to the pandemic it has caused and the restrictions imposed to curb its spread.

Over 214 million people worldwide have been infected, of whom 4.47 million have died, as of Aug. 27, 2021, for a case fatality rate of 2.08 percent, according to the World Health Organization (WHO).

Yet infections are accelerating, courtesy of more highly transmissible virus strains, like the Delta variant now detected in 132 countries.

When will this pandemic end?

A look at past pandemics may provide a hint on how the current pandemic could play out.

Despite its fearsome reputation, the 2002-2003 outbreak of the first identified strain of the Severe acute respiratory syndrome coronavirus (Sars-CoV-1) was not classified as a pandemic. It infected just 8,437 people worldwide, killing 10 percent of them.

A pandemic occurs when an epidemic has spread over several countries or continents, affecting large numbers of people, said the CDC.

Number of people infected: 500 million or one-third of the world’s population

Of the three influenza pandemics during the 20th century, the pandemic of 1918-1920 was the most virulent, killing an estimated 20-50 million people worldwide.

The spread of the virus was facilitated by the movement of soldiers across continents during World War I. The first cases in the United States were found in a military camp in March 1918, the CDC said.

The pandemic was called the Spanish flu because the first reports of the illness appeared in Spanish newspapers, which could report freely as Spain was a neutral country, unlike combatant countries which suppressed news on the flu, according to Britannica.

With no vaccines to prevent infection or antibiotics to treat secondary bacterial infections associated with the flu infections, the pandemic was controlled through a combination of quarantine, isolation, personal hygiene, disinfectant use and limits on public gatherings, the CDC said.

Mask mandates were also imposed. Theaters, schools and other businesses were closed, and people were encouraged to avoid public transport or to employ staggered work hours to prevent crowding in such transport.

The virus first popped up in southwestern China in February, then Hong Kong in April 1957, quickly crossing by sea from Hong Kong to Singapore and Japan, and to the then USSR through the Trans-Siberian Railway, according to M.E. Kitler, P. Gavinio and D. Lavanchy in “Influenza and the work of the World Health Organization.”

On reaching the United States, the virus remained prevalent there for 10 years, they said.

The rapid deployment of a vaccine against the H2N2 virus beginning in August, and more widely by October 1957, and the invention of antibiotics to treat secondary bacterial infection curbed the pandemic’s spread and mortality.

“H2N2 viruses disappeared from human circulation when the H3N2 virus emerged [a decade later], just as the H1N1 virus had ceased to circulate in 1957 when the H2N2 strain appeared,” Kitler et al. wrote.

The H2N2 virus that caused the Asian flu was a “descendant of the 1918 H1N1 pandemic virus that acquired three novel gene segments by reassortment with an unknown avian virus,” said the US National Center for Biotechnology Information (NCBI).

As with the Spanish flu virus, after about two years, the Asian flu virus became seasonally endemic and sporadic, disappearing completely in 11 years, the NCBI said.

In July 1968, some 500,000 influenza-like illness cases in Hong Kong raised an alarm. By August, the virus that caused them had reached Singapore, Taiwan, the Philippines, Vietnam and Malaysia; by September, Thailand, India, Iran and Australia; by October, the United States, according to the NCBI.

Air travel by 160 million people during the pandemic enabled the rapid global transmission of the virus, it said.

Antiviral medications and vaccines were used to combat the pandemic.

Though the first vaccines arrived in November, with bigger batches when the pandemic hit the peak in January 1969, there was criticism that the vaccines had come too little too late. So its role in curbing the pandemic has been thrown into question.

The CDC says the H3N2 virus continues to circulate worldwide today as a seasonal influenza A virus.

Months after the first human cases were reported in the United States and Mexico, the WHO declared a pandemic on June 11, 2009 after the virus had hit 74 countries and territories.

The virus reached all continents in less than nine weeks.

Antiviral drugs, quarantines of travelers from flu-infected countries and school closures were used to deal with the new virus. In October, the first doses of the H1N1 vaccine were administered in the United States.

The WHO declared the end of the influenza pandemic on Aug. 10, 2010, but not before recommending the inclusion of a 2009 H1N1-like virus in the vaccines against seasonal influenza.

Sars: Then and now

These past pandemics tell us that about two years from emergence, the viruses that caused them tended to become endemic. But these were for influenza pandemics.

With Covid-19 caused by a different virus, the virus could behave differently in this first coronavirus pandemic.

Even the 2003 and current coronavirus outbreaks have many differences.

Caused by a virus genetically related to the one causing the Covid-19 outbreak, the 2003 Severe acute respiratory syndrome (Sars) outbreak was controlled in months after a journey to 30 countries and areas.

But the WHO says it became deeply imbedded in just six of those areas. In Asia, mask mandates, temperature scanning in public areas and strict quarantines for close contacts of infected persons did much to control the infection.

Avoiding travel to these few areas and sending alert notices to travelers who may have been exposed to Sars cases, as well as practicing hand washing and cough etiquette, did the rest to control the epidemic.

No vaccines were deployed. The virus had vanished before a vaccine could be developed.

Sars-CoV-1 infected only 8,437 people throughout its nine-month run.

In contrast, when the WHO declared the Covid-19 pandemic on March 11, 2020, some 118,000 people had already been infected in 114 countries, of whom about 4,300 had died. The virus has stayed well beyond a year. And vaccination is a cornerstone in the fight against it today.

“The pandemic will end when the world chooses to end it. It’s in our hands. We have all the tools we need: We can prevent this disease, we can test for it, and we can treat it,” WHO Director-General Dr. Tedros Adhanom Ghebreyesus said in a media briefing on July 30, 2021.

But at the same briefing, he admitted that no sooner had he said this to the International Olympic Committee in Tokyo than four million new Covid-19 cases worldwide were reported to the WHO in a week.

He attributed the continued rise in infections to increased social mixing and mobility, the inconsistent use of public health and social measures, and inequitable vaccine use.

Ghebreyesus said the WHO would support every country to vaccinate at least 10 percent of its population by the end of September, at least 40 percent by yearend, and 70 percent by the middle of 2022.

But he also acknowledged that the world is still “a long way off achieving those targets.”

The Philippines has not done too shabbily though.

Though it’s still far off the mark to ensure herd immunity, it has enabled economies to reopen and moved people closer to a return to the life they once took for granted but now can only dream about.