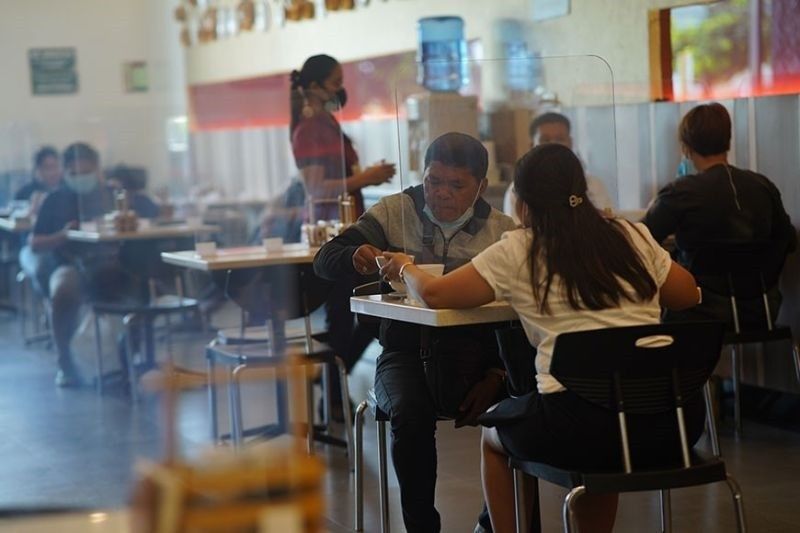 CEBU. Customers of a restaurant share a table with a barrier while having their lunch. (SunStar File)

The Cebu City Government stressed this in Executive Order (EO) 138, which was issued by Acting Mayor Michael Rama Thursday, September 2, 2021.

The EO, referred to as “Oplan Puyo 9-2-7,” stated that “food preparation establishments such as kiosks, commissaries, restaurants and eateries are allowed to operate outdoor dine-in services (al fresco) at 50 percent capacity, while indoor dine-in services though allowed is limited at 10 percent capacity and for Covid-19 vaccinated customers only” while Cebu City is under modified enhanced community quarantine (MECQ).

It added that personal care services limited to beauty salons, barbershops, beauty parlors, and nail spas are also allowed to operate at 30 percent capacity but only for customers vaccinated against Covid-19.

These establishments, however, must have a Protocol Compliance Certificate (PCC) issued by the Emergency Operations Center (EOC) in coordination with the barangay and it personnel must also be vaccinated.

The PCC must be displayed at the entrances of the public establishments. It must state the establishments’ venue capacity and allowed capacity, as well as the prohibitions.

“Any violation shall result in the immediate revocation of the PCC,” the EO stated.

Religious gatherings are also allowed up to 30 percent of the venue capacity, “provided that there is no objection from the Cebu City Government where the religious gathering may take place.”

The serving and consumption of liquor and other alcoholic beverages in public places are still prohibited, while street traders or ambulant vendors are not allowed to operate except in certain areas duly authorized or designated by the Gasa sa Gugma Board and subject to existing city ordinances and policies.

“The Cebu City Government, through the Office of the Mayor Edgardo Labella, finds the proposed enhancements to be in accord with existing rules and guidelines issued by the Inter-Agency Task Force, Department of Trade and Industry and other government agencies,” Rama said in his EO.

He added that the order will take effect immediately until September 7, 2021, unless extended.

Rama has been serving as Cebu City’s acting mayor since Thursday, September 2, until September 7, while Mayor Edgardo Labella is on personal leave. (LMY)