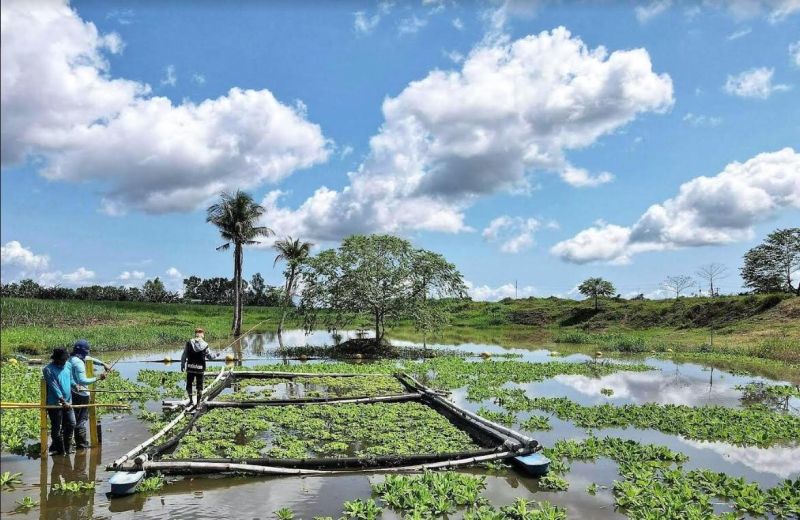 Victorias Milling Company’s rehabilitated lagoons in Manapla town are filled with lush vegetation and have become a fishing ground. For the firm, it dispels claims of pollution. (Contributed Photo)

THE Victorias Milling Company (VMC) has decried all allegations against its distillery plant in Manapla town, Negros Occidental as “baseless” and “unsubstantiated.”

VMC President Minnie Chua, in a statement, said that they have not violated any laws contrary to the claims of various groups that the distillery is operating illegally, among other issues.

On the alleged pollution, the firm said it has regularly and consistently budgeted and spent on capital expenditures (Capex) to address environmental concerns, particularly on the reported foul odor around the distillery since early 2020.

The VMC has invested in modern structures and technological processes to eliminate odor, it said.

The most recent one is the installation of an Anaerobic Digester to lessen the presence of odor-causing bacteria in the slops by 60 to 70 percent and converting it to biogas.

It has an Automatic Flaring System to eliminate odor-causing gases, and improvements in wastewater treatment methods at the aeration ponds such as filtration, aeration and dosing of enzymes to counteract the odor-causing chemical reaction in the digesters.

Additional units of aspirating surface aerators in the Aeration Ponds to help eliminate odor were also installed, the company said.

“We have invested over P200 million on these improvements to ensure we are environmentally compliant and the residents can attest to this,” the VMC said.

“Thus, it is quite unbelievable that these pollution and foul odor claims from a few people have any basis while the majority are satisfied with our efforts to make these improvements and rehabilitation we’ve introduced,” it added.

The distillery also stressed that it is covered with the proper Environment Compliance Certificate (ECC) issued by the Department of Environment and Natural Resources - Environment Management Bureau (DENR-EMB) for the operation of its vacuum distillation, dehydrator and irrigation ponds.

Moreover, the distillery’s irrigation ponds are covered with the proper permits and licenses, it said.

“That is why it is unfair for these people to accuse the mayor’s office and all concerned government agencies for siding with us when we are doing our part in following due process and complying with the necessary regulatory and reportorial requirements,” Chua said.

Chua said the VMC has also been conducting tree planting activities in areas surrounding the industrial and natural polishing lagoons and aeration ponds to serve as natural air purifiers.

It helped establish the multi-partite monitoring team (MMT) with the local governments of Manapla and Cadiz in 2020 involving government officials, environmental agencies, health experts and members of the communities to work hand-in-hand in preserving the environment, she added.

While this is no longer a requirement by the EMB, the VMC believes this will set up a proper venue for community members to raise and resolve issues or complaints immediately with the representative government officials and agencies.

“Our critics have been issued invitations to attend these meetings so they can air their concerns but they opted to issue baseless claims instead which makes us suspect their motives,” its official said.

She added that “nevertheless, the VMC remains committed to protect the environment and create value to the communities where it operates and with this, the invitation remains open to media who wish to come and visit the distillery, as they had in the past, to see for themselves the improvements that the company has implemented over the years.”

On alleged land grabbing, the company’s statement further stated that there is no truth in the statement that the distillery is encroaching on other people’s properties. Nor is there any truth that VMC has received any payment from the Land Bank for said properties.

Where did these critics get information on this so-called payments, it asked.

Certain areas in Manapla were zoned as commercial or industrial by proper authorities before the Comprehensive Agrarian Reform Program (Carp) law took effect in 1988, and this includes the VMC's distillery.

So as ordered by the DAR in 2017 and 2019, the land where the VMC Manapla distillery is located has been exempted from Carp, the firm said.

On the non-Securities and Exchange Commission (SEC) registration, meanwhile, the VMC said it is a corporation duly organized and existing under and by virtue of the laws of the Republic of the Philippines.

As part of the entire VMC business operation, the VMC Distillery – Alcohol Bioethanol is not a separate entity and is sanctioned by the Primary and Secondary Purposes of the Amended Articles of Incorporation of VMC which has been duly approved by the Securities and Exchange Commission (SEC) and, as such, was legitimately granted a Business Permit by the Municipality of Manapla, the company said.

“We sincerely hope this puts all issues to rest and at the end of the day, we are confident that the law is behind us because we have always been in good faith in complying with all governing laws and bodies concerned in our operations,” it added.