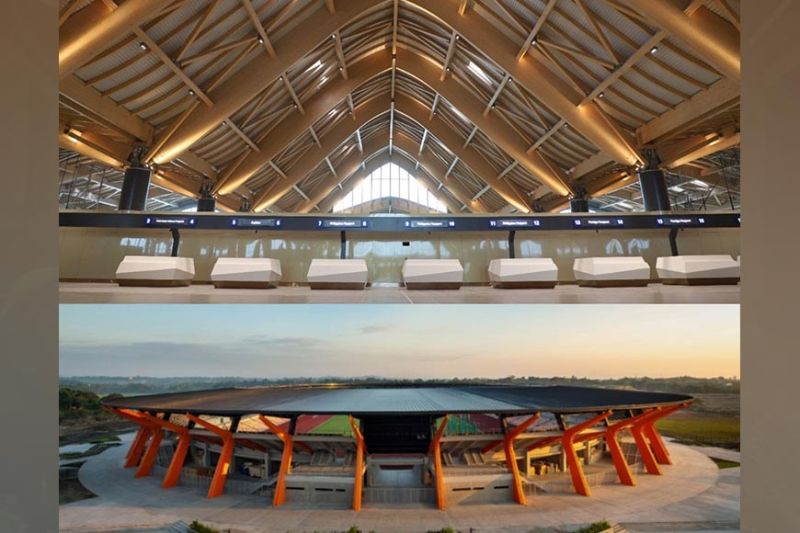 INSPIRED by the natural beauty and key features of Central Luzon, the new Clark International Airport (CRK) terminal in Pampanga and the New Clark City Athletics Stadium in Tarlac are both in the running for prestigious global design awards.

The new CRK airport terminal is one of six airport finalists at the 2021 Prix Versailles World Architecture and Design Award, while the New Clark City Athletics Stadium has been shortlisted among the world's best-completed buildings at the World Architecture Festival.

“These global recognitions mark a milestone in modern Filipino architecture and design, reflecting local heritage and talent,” said Bases Conversion and Development Authority (BCDA) President and Chief Executive Officer Vince Dizon. “We in government are very proud that the beauty of the Philippines, particularly of Central Luzon, will be discussed and highlighted on the international stage because of these architectural masterpieces. To the thousands of Filipino workers, from masons to designers, engineers and architects, involved in the Athletics Stadium and the new Clark terminal, our sincerest gratitude to all of you.”

CRK is the only airport in Southeast Asia to be included in the 2021 Prix Versailles World Architecture and Design Award. This is also the first time a Philippine airport has made it to the Prix Versailles list.

BCDA and the Department of Transportation are the implementing agencies of the CRK New Passenger Terminal Building. The structure of the new CRK terminal was built by the consortium of Megawide Construction Corporation and GMR Infrastructure, with Budji+Royal Architecture+Design as the architect. Meanwhile, the operations and maintenance of CRK are being overseen by Luzon International Premiere Airport Development Corporation (Lipad), a consortium of Filinvest Development Corporation, JG Summit Holdings, Changi Airports Philippines and Philippine Airport Ground Solutions. Lipad appointed Populous and Casas+Architects for the gateway’s fit-out and interior design.

CRK passengers and visitors will be greeted with the view of Sacobia mountain ranges in the west, and Mount Arayat towards the east.

“Passenger experience was at the heart of this design,” said Populous Principal Architect Ben Dawson.

“We brought our world-leading experience in aviation design to create a space that is international in its standards for passengers while delivering a strong sense of place and cultural heritage for Filipinos,” Dawson added.

The inspiration behind the design of the new CRK terminal is the melding of Central Luzon’s natural and cultural heritage, which is manifested in the play of shapes, textures, and forms in its facilities.

“Nature was a major source of CRK’s inspiration during its conception as it presents, with emphasis, our identity as Filipinos. The silhouette and its permeable character highlight its environment and people. Its majesty is not about standing out amidst what is around it but rather it is about taking part in the grand orchestra of the place,” said Royal Pineda, principal architect of Budji+Royal.

Equipped with contactless bag drops, check-in counters, and an ordering system, the new CRK terminal will be able to serve up to 8 million passengers annually. Once its doors open by the end of 2021, CRK passengers and visitors will also enjoy other inclusive features like a transit lounge for overseas Filipino workers and a separate exclusive lounge for soldiers and police officers.

The new CRK terminal is the first hybrid public-private partnership project that was planned, constructed and completed–from start to finish–under the Build Build Build program of the Duterte administration.

With a 20,000-seating capacity, a nine-lane 400-meter track and field, and another four-lane warm-up track, the New Clark City Athletics Stadium served as a venue for the 30th Southeast Asian Games in 2019. BCDA tapped Budji+Royal to be its architectural partner for the stadium.

“To have this opportunity to share the New Clark City Athletics Stadium’s authentic nature and identity with our colleagues and an international audience makes me really very happy and proud. That was the objective anyway – to present our variety as modern Filipinos through architecture and design,” said Pineda, noting that the design celebrates Mount Pinatubo and Filipino resilience.

Aside from the crater of Mount Pinatubo, the stadium’s design also drew inspiration from the contours of the Sierra Madre ranges and the festive details of the parols of Pampanga.

New Clark City Athletics Stadium is the first major sports hub constructed by the government since the completion of the Rizal Memorial Sports Complex in 1934. It is also the first-ever facility in the country to receive a Class 1 certification from the International Association of Athletics Federations. The facility’s design was ably executed by MTD Philippines, BCDA’s development partner in New Clark City.