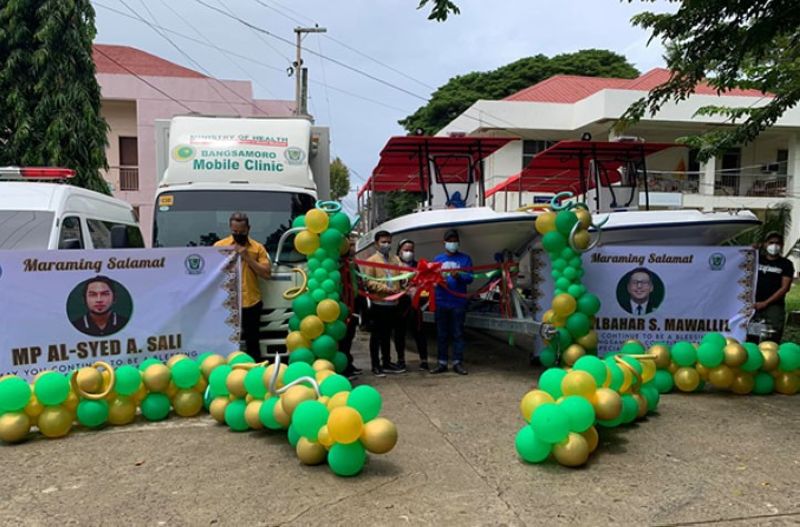 AMBULANCE UNITS. The Ministry of Health in the Bangsamoro Autonomous Region in Muslim Mindanao (MOH-Barmm) turns over two land and two sea ambulances Sunday, August 29, to the Integrated Public Health Office (Ipho) of the province of Tawi-Tawi. A photo handout shows the Ipho officials unveiling the ambulance units in a simple ceremony at Datu Halun Sakilan Memorial Hospital in Bongao, Tawi-Tawi. (SunStar Zamboanga)

THE Ministry of Health in the Bangsamoro Autonomous Region in Muslim Mindanao (MOH-Barmm) turned over two land and two sea ambulances to the Integrated Public Health Office (Ipho) of the province of Tawi-Tawi.

The distribution of the ambulance units was realized through the Transitional Development Impact Fund (TDIF), a lead project of the Bangsamoro Transition Authority (BTA) that assists identified beneficiaries.

The distribution of the TDIF projects in Bongao, the capital town of Tawi-Tawi, were allotted to Members of Parliament (MPs) Amilbahar Mawallil and Al-Syed Sali, who are representing the province in the Barmm Parliament.

The turnover of the sea and land ambulance units was held in a simple ceremony Sunday, August 29, at Datu Halun Sakilan Memorial Hospital (DHSMH) compound in Bongao, Tawi-Tawi.

Dr. Sangkula Laja, DHSMH chief, said Mawallil sponsored the procurement of the equipment and identified the provincial hospital (DHSMH) as recipient of one land ambulance, one mobile X-ray ambulance and one sea ambulance from his share of the TDIF.

Laja also identified the Alawadin T. Bandon, Sr. Municipal Hospital in Sitangkai town as a recipient of one sea ambulance and P500,000 worth of assorted medicines.

Sali, on the other hand, has identified the provincial hospital as recipient of one sea ambulance from his share of the TDIF.

“We wish to thank and express our passionate gratitude to MPs Mawallil and Sali and to the Bangsamoro Government for their generosity, and for continuously helping and supporting the health care system in Tawi-Tawi,” Laja said.

“We also hope in the future they will give more,” Laja added. (SunStar Zamboanga)