ABBA back after 40 years with new album, virtual stage show 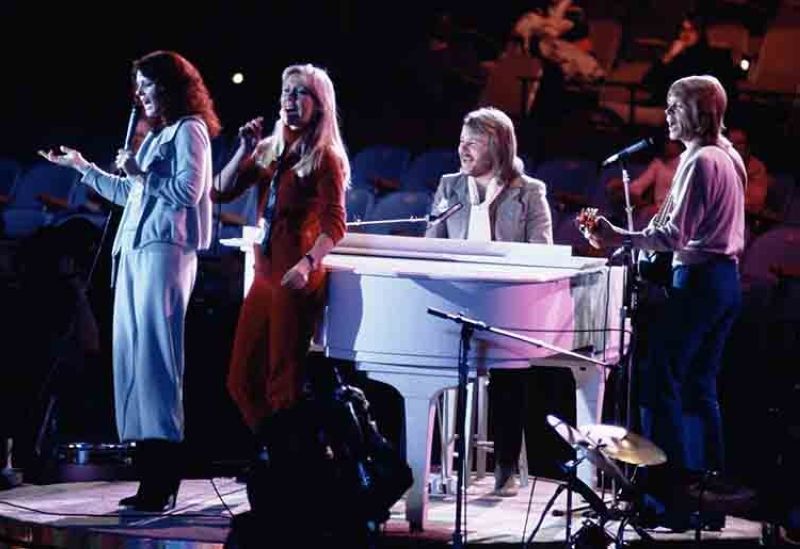 Abba, from left, Anni-Frid Lyngstad, Agnetha Foltskog, Benny Andersson and Bjorn Ulvaeus perform at United Nations General Assembly, in New York, during taping of NBC-TV Special, "The Music for UNICEF concert" on Jan. 9, 1979. ABBA is releasing its first new music in four decades, along with a concert performance that will see the “Dancing Queen” quartet going entirely digital. The forthcoming album “Voyage," to be released Nov. 5, is a follow-up to 1981's “The Visitors,” which until now had been the swan song of the Swedish supergroup. (AP File Photo)

LONDON — ABBA is releasing its first new music in four decades, along with a concert performance that will see the “Dancing Queen” quartet going entirely digital.

The forthcoming album “Voyage," to be released Nov. 5, is a follow-up to 1981's “The Visitors,” which until now had been the swan song of the Swedish supergroup. And a virtual version of the band will begin a series of concerts in London on May 27.

“We took a break in the spring of 1982 and now we’ve decided it’s time to end it," ABBA said in a statement Thursday. “They say it’s foolhardy to wait more than 40 years between albums, so we’ve recorded a follow-up to 'The Visitors.'”

The group has been creating the live show with George Lucas’ special-effects company, Industrial Light & Magic. They say the virtual versions of themselves are “weird and wonderful,” and go beyond holograms.

“It was suggested to us that we could go on tour as a hologram. And this is now four, five years ago," Björn Ulvaeus, ABBA's 76-year-old guitarist, backup singer and co-songwriter said at a news conference Thursday. “And we found out very soon that that wasn’t even possible because holograms is an old technology, but I mean, the vision was there of having our digital selves, that even was a possibility.”

“And also,” said Benny Andersson, 74, who plays keyboards, sings and writes songs with Ulvaeus, “we want to do it before we were dead.”

Ulvaeus added, ”it’s good if you do that before you dead. Because it gets more accurate then.”

They sang and played together for hours every day for weeks, using motion capture and other techniques to create the 22-song, approximately 90-minute show.

“We dressed up in a leotards with dots or little things on them,” Ulvaeus said. “And we had dots in our faces and helmets with cameras. And there we were, the four of us on stage together doing these songs.”

They say it was hard work but a great pleasure, but for one thing.

“I’d say the only big problem was that we had to shave our beards,” Andersson said. "I’ve had my beard for 50 years.”

The planned show spurred the making of the album, which features the new songs “I Still Have Faith In You” and “Don’t Shut Me Down.” It began with sessions in 2018 and was delayed by the coronavirus pandemic.

“It was so joyful to be together in the studio again, the four of us,” Andersson said."

The show will come 50 years after the founding of the group that consisted of two married couples for most of its existence, and whose name is an acronym of the first names of its members, Agnetha Fältskog, 71, Anni-Frid Lyngstad, 75, Ulvaeus and Andersson.

Their music has remained ubiquitous in the decades since their breakup, in part because of the stage musical “Mamma Mia!” and the two films that followed it.

They were inducted into the Rock and Roll Hall of Fame in 2010.