Davao Region remains under GCQ, some areas with heightened restriction 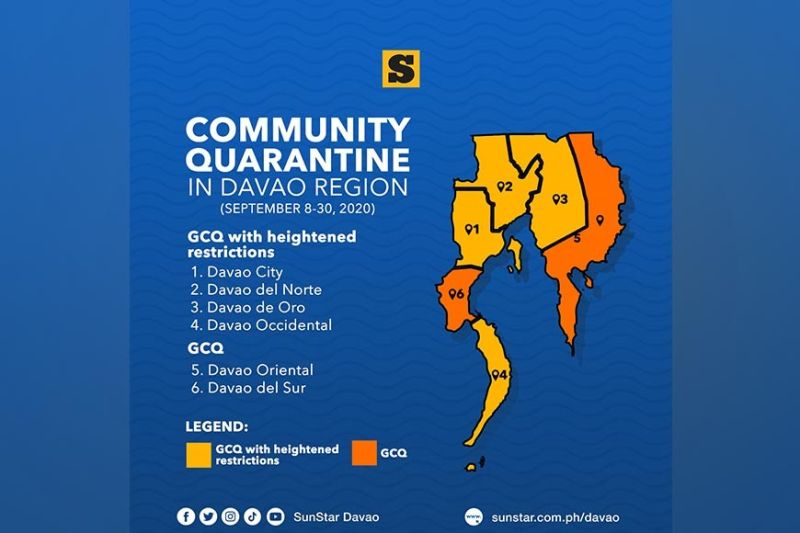 AMID the rising Covid-19 cases in Davao Region, the Inter-Agency Task Force for the Management of Emerging Infectious Diseases (IATF) placed the entire region under general community quarantine (GCQ), with some areas under heightened restrictions until the end of September 2021.

The Provincial Government of Davao Oriental, as of Monday night, has not issued any statement if they will adopt the IATF order. The province recently announced that it will be implementing a two-week enhanced community quarantine (ECQ) from September 8 to 21 to address the alarming surge in Covid-19 cases that have already started to overwhelm health and isolation facilities.

Davao Region reported another record-breaking 1,123 new Covid-19 cases on Sunday, September 5. Total cases in the region were at 73,632.

Dr. Raquel Montejo, DOH-Davao Local Health Support Division chief, said in a virtual presser on Monday that some local government units (LGUs) have been requesting the change of their quarantine status as cases in their locality surge.

On the health parameters, she said among the basis being considered is the two-week growth rate (2WGR), average daily attack rate (Adar), and the area's critical utilization rate.

She said placing a certain area under the highest quarantine restriction would entail a certain balance.

Davao City Mayor Sara Duterte-Carpio revealed in a radio interview on Monday afternoon that the health group had recommended that the city be placed under ECQ due to the current surge.

However, the mayor said the Covid-19 Task Force asked the health group to look into the numbers and see if it is deemed fit for an ECQ under the IATF criteria.

"On our own, we do not have a criteria because ang nagahatag og (the ones dictating our) community quarantine classification is ang (the) IATF," Duterte-Carpio said.

The mayor said they have yet to discuss it with the body in case the figures would fit for the city to be placed under a higher quarantine status.