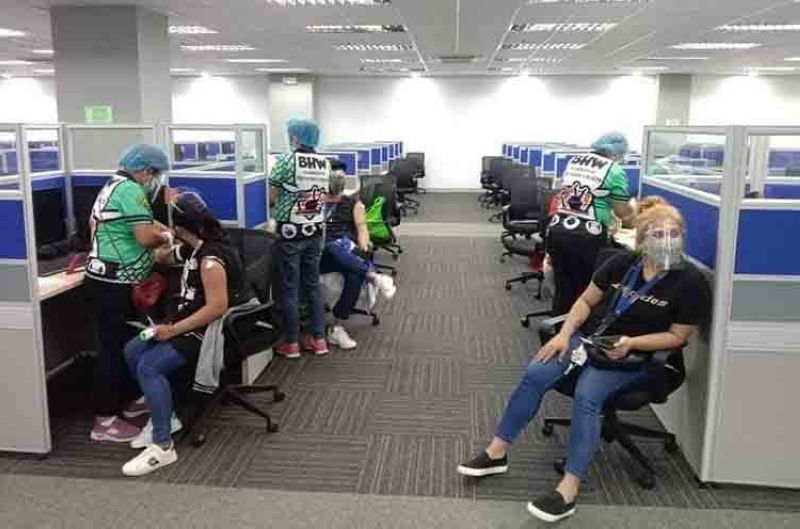 BACOLOD. Vaccination at the ARB Call Facilities over the weekend. (Contributed photo)

Both the EOC and the CoVaC are chaired by Mayor Evelio Leonardia.

It had also inoculated employees of Teleperformance and Focus Direct at the vaccination center in Ayala Malls Capitol Central.

The EOC and the CoVaC have introduced innovative and aggressive strategies to the vaccination campaign of the city -- all geared towards achieving herd immunity.

One of these is the Graveyard Shift Vaccination Drive for night-duty BPO workers, which is one of its kind in the country.

Other strategies included the 24/7 vaccination drive, VAX-i mobile bus vaccination, the drive-thru vaccination, the "BigJab Weekend" at two major malls, the mall-based inoculations, and on-site campaign at BPO firms, among others.

“Vaccination is currently the leading public health strategy to end the Covid-19 pandemic. In order to fast-track our vaccination program, we are reaching out to as many workers and populous sectors as possible and making Covid-19 vaccines accessible to all eligible persons,” Ang said.

Leonardia said the city government's goal is to make the vaccines available to as many Bacolodnons.

The third bus is called the “Philippine Red Cross Bakuna Bus” which is manned by a team of volunteers, with vaccines provided by the Bacolod City government.

On Monday, September 6, the Bakuna Bus was scheduled to go to Eroreco Subdivision in Barangay Mandalagan.

Ang added that the City Government and the Philippine Red Cross have an ongoing partnership through the vaccination site at Gaisano City. (PR)