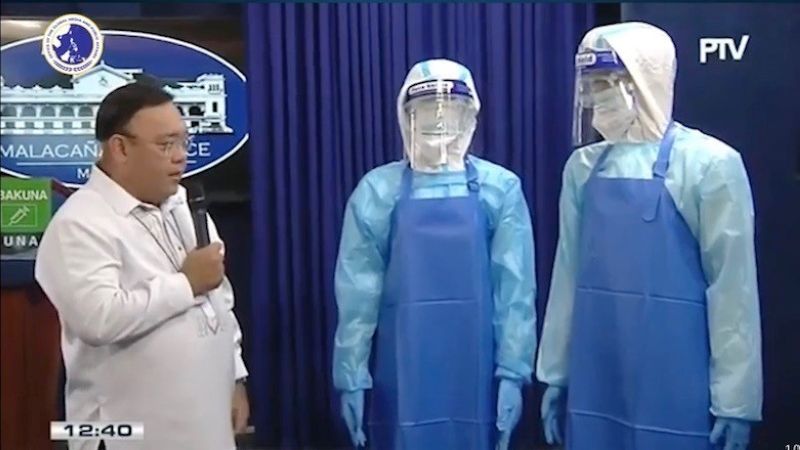 MANILA. Presidential Spokesperson Harry Roque Jr. shows the parts of a set personal protective equipment similar to those procured by the PS-DBM for the Department of Health. (Screenshot from state-owned PTV)

A FILIPINO-OWNED company said it incurred losses when the Procurement Service (PS) of the Department of Budget and Management (DBM) put its shipment of locally produced medical supplies on hold.

Fedinand Ferrer of the EMS Components Assembly Inc. said they were awarded a P1.3 billion total contract by the PS for the procurement of 100,000 pieces of medical grade face masks at P13.50 each on April 27, 2020.

At the resumption of the Senate blue ribbon committee on the alleged misuse of coronavirus disease 2019 (Covid-19) pandemic response funds Tuesday, September 7, 2021, Ferrer said his company was supposed to deliver 8.5 million face masks per month starting in June 2020.

He said they were able to deliver 25.8 million of face masks until November 2020.

“We were put on hold. There was a communication to us that our shipment was put on hold and not to deliver,” Ferrer said.

“Every time we ship we request permit to ship to PS DBM, we were not given authority to ship and was delayed. There were reason that were given to us, the warehouse has enough inventory,” he added.

Ferrer said the 74.1 million remaining face masks were delivered in the first quarter of 2021 but the price was lowered to P2.35 each.

“We received a letter from PS DBM earlier this year. It is part of the contract we have to match lower prices. We did,” he said.

He said they had invested P200 million in raw materials, equipment and factory retooling.

He noted that the PS paid a total of P8.819 billion to Pharmally Pharmaceuticals Corporation for the delivery of face masks, face shield, personal protective equipment and Covid-19 test kits.

In the course of identifying where the Covid-19 supplies procured by the PS-DBM went, National Task Force (NTF) against Covid-19 chief implementer Carlito Galvez Jr. said they utilized the warehouses at the Armed Forces of the Philippine (AFP) headquarters in Camp Aguinaldo in Quezon City because the DOH did not have warehouse space at the onset of pandemic.

Galvez said the medical supplies were later delivered to over 600 hospitals across the country.

It was also revealed during the hearing that the supplies bought from Pharmally was fetched from China at the expense of the Philippines.

He explained that the Philippines was then racing against time as the country did not have enough medical supplies especially for the frontline health workers.

Senator Panfilo Lacson pointed out the difference in the PS’s treatment of local companies and foreign companies.