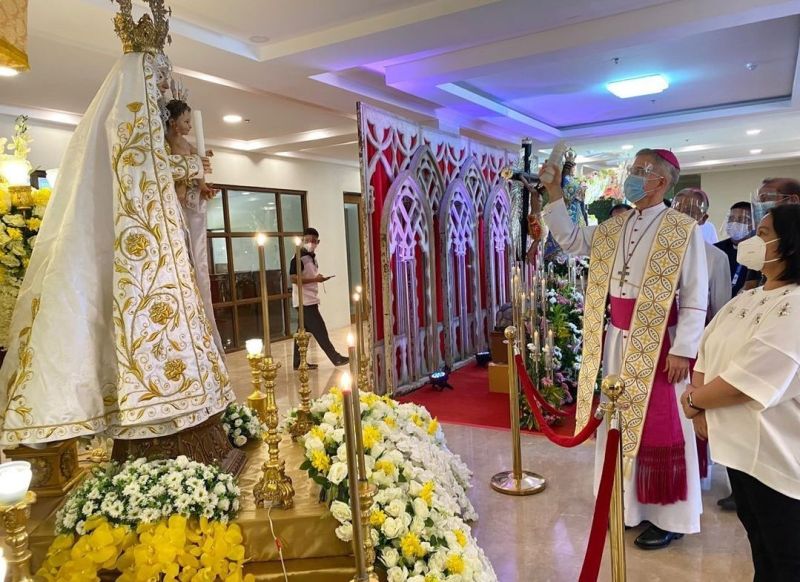 BLESSING. Papal Nuncio to the Philippines Archbishop Charles John Brown blesses an image of the Blessed Mother mounted in a private exhibit at the Legislative Building of Capitol on Tuesday, September 7, 2021. Looking on is Vice Governor Lilia Pineda. (Contributed photo)

“PLEASE bless all our citizens, local officials and hardworking frontliners so that we can be able to manage and overcome the covid-19 pandemic that has affected us.”

Thus asked Governor Dennis Pineda on Tuesday, September 7, during a program held for the civil reception of Papal Nuncio to the Philippines Archbishop Charles John Brown, who is scheduled to celebrate the Holy Mass on September 8 at the San Vicente Ferrer Parish in Barangay Calulut to commemorate the canonical coronation of the Virgen de los Remedios in 1956 or 65 years ago.

The late Bishop Cesar Ma. Guerrero began the crusade of penance and charity in 1952 to end the social unrest in the province as a result of landlessness. Vatican, through Pope Pius XII, decreed the canonical coronation of the image in 1956, signaling the start of the sharing of lamac (offerings) that helped bridge the gap between the rich and poor in the province. To this day, the image and that of the Santo Cristo del Perdon (Crucified Christ) travel from town to town, the crusade sustained by prayers and acts of generosity to poor families.

An 18-inch image of the Virgen de los Remedios de Baliti sculpted by Maestro Wilfredo Layug and a Capiz parol (lantern) handcrafted by Rolando Quiambao were gifted by Layug and Governor Pineda and Vice Governor Lilia Pineda to Archbishop Brown. He was shown an exhibit of Marian images and was treated to songs by Arti Sta. Rita.

Vice Governor Pineda and the Provincial Board presented Resolution 6926, expressing the province’s deepest appreciation for the presence of the Papal Nuncio in the September 8 event.

The Papal Nuncio hailed the people of Pampanga for their “extraordinary way” of expressing the faith in their culture and heritage.

“There is a beautiful harmonization of Filipino values and Christianity in the Simbang Gabi, Giant Lantern Festival, songs and devotion to the Virgen de los Remedios,” he said.

He also expressed admiration for Filipinos who spread the faith all over the world.

The Pope celebrated the Mass at the St. Peter’s Basilica in the Vatican City for the 500 years of Christianity in the Philippines.