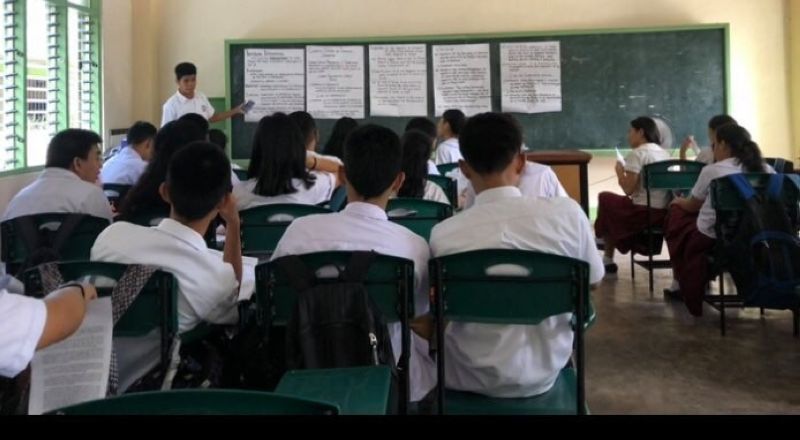 NEGROS. Face-to-face class held in a school in Bacolod City prior to the pandemic. (File photo)

BACOLOD City Councilor Renecito Novero, chairperson of the City Council committee on education, expressed his opposition against the resumption of face-to-face classes in several schools this school year.

Novero was reacting to the announcement made earlier by the Department of Education (DepEd) that the agency is now preparing for the pilot test for physical classes this month once approved by President Rodrigo Duterte.

Education Undersecretary Nepomuceno Malaluan earlier said the program will be voluntary in the areas that are not at risk of the coronavirus disease (Covod-19).

The dry run will cover kindergarten and Grades 1 to 3. The proposal also seeks to reduce class size to 12 to 16 learners, he said.

"They are now preparing it, but hopefully, they will not continue this plan for the safety of our children as well as our teachers," Novero said.

He noted that currently, there is no safety assurance yet, so for now, there is no urgency for the resumption of face-to-face classes.

"I am fully aware that the threat of Covid-19 remains high and we have Delta variant cases. So we need to protect our children and for now, let's disregard the face-to-face classes," he added.

Novero said the DepEd should instead continue the blended learning method for the safety of the students, teachers, as well as the parents and if they need to improve it, they should find ways to do so.

"If our blended learning method is sufficient then, we will continue it for the meantime until we reach herd immunity status. We should not risk the lives of our children and the teachers," he said.

He added that the present distant learning method being implemented in some areas like Bacolod is also effective.

The DepEd proposed that classes will have as many as 12 students for kindergarten, 16 for Grades 1 to 3, and the school hours will be shortened.

Under the resolution, there should be no substitute to face-to-face classes, which is probably the best way to arrest the decline in quality of education and improve learner outcomes.

Sotto, in a statement, added that there are deep concerns that while countries whose students had performed well in the past international assessments are already back on track, the Philippines is still lagging behind using the blended learning method, which to many is not an effective means due to lack of access to internet and gadgets by majority of pupils and students.

He said the Philippines remains one of the 14 countries out of 150 countries worldwide, and the only country in Southeast Asia that has its schools still closed.