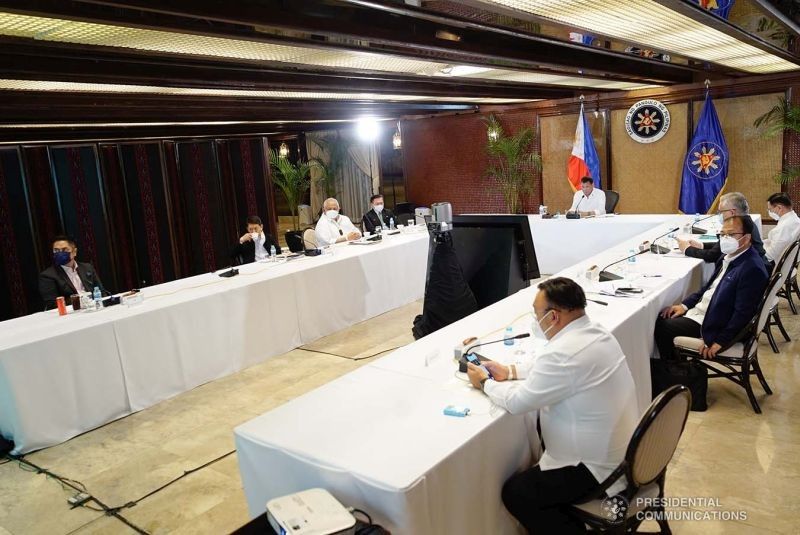 MANILA. President Rodrigo Duterte presides over a meeting with the Inter-Agency Task Force for the Management of Emerging Infectious Diseases (IATF) core members prior to his talk to the people at the Malacañang on September 7, 2021. (Presidential Photo)

PRESIDENT Rodrigo Duterte and members of his Cabinet defended the procurement of medical supplies for healthcare workers at the forefront of the battle against the coronavirus disease 2019 (Covid-19) pandemic in 2020.

In a recorded address that was aired Wednesday, September 8, 2021, Duterte reiterated that there was no corruption in the transactions entered into by the government, through the Procurement Service (PS) of the Department of Budget and Management (DBM) using DOH’s Covid-19 funds.

He again accused Senator Richard Gordon and other senators of politicking. Gordon chairs the Senate blue ribbon committee, which is conducting an investigation into the deficiencies in the use of Covid-19 response funds by the Department of Health (DOH).

“’Yung ginagawa ninyo sa administrasyon is really politicking. Maybe we just achieved so much that the fight cannot be done based on the merits,” said Duterte.

He said the purchase of personal protective equipment (PPE) was supported by the Government Procurement Reform Act and Bayanihan to Heal as One Act, which allow negotiated procurement in case of imminent danger to life and property during a state of calamity.

Duterte said he has been doing his best to lead the government agencies in addressing the Covid-19.

He apologized to the Filipino people who think he is not doing enough.

He said the Senate investigation into the DOH transactions is not intended to ferret out the truth.

Duterte described Gordon as “adversarial” as he played both the role of a judge and a prosecutor during the inquiry.

Duterte said Gordon should step down from his post as the chairman of the Philippine Red Cross (PRC). He reiterated that he wants the PRC to be audited to determine how government funds were spent.

"We need to know nasaan na ang pera, Senator Gordon. I am demanding an answer, and we will go over it with the COA (Commission on Audit) report which is a public document," said Duterte.

"Takot ka (ma-audit) kasi marami kang atraso over the years. You won't have the time to cover up everything," he added.

Duterte's tirades against the senator intensified after Gordon said their investigation may go as high as Duterte after his former long-time aide, now Senator Christopher Go and his former adviser for economic affairs Michael Yang were linked to Pharmally Pharmaceuticals Corporation, a small company that bagged a contract worth P8.68 billion to supply face masks, face shields, PPE sets and Covid-19 test kits to the DOH in 2020.

During Duterte's public address, Trade and Industry Secretary Ramon Lopez said the prices quoted by Pharmally were within the suggested retail prices for those items at the time.

National Task Force (NTF) Against Covid-19 chief implementer Carlito Galvez Jr., for his part, justified the use of a military plane to pick up the items, saying they had to ensure that the Philippines get the items amid the mad scramble for medical supplies at the time. (Third Anne Peralta-Malonzo / SunStar Philippines)