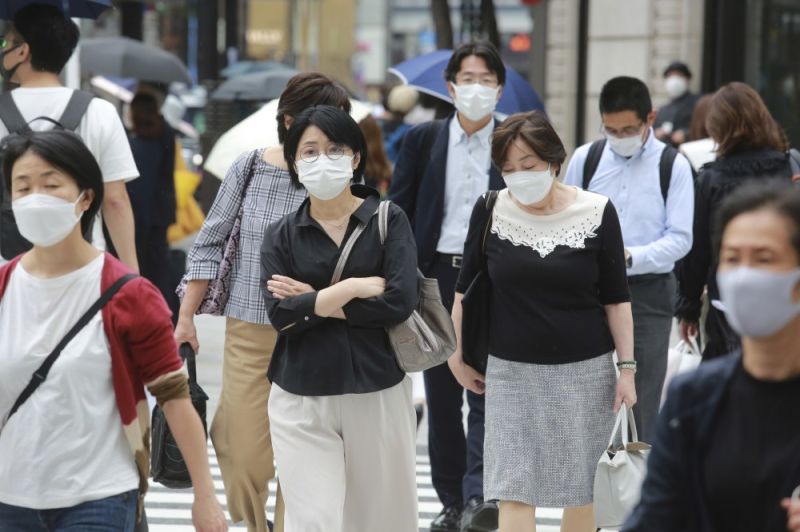 JAPAN. People wearing face masks to protect against the spread of the coronavirus walk on a street in Tokyo Wednesday, September 8, 2021. (AP Photo)

JAPAN announced Thursday, September 9, 2021, it is extending a coronavirus state of emergency in Tokyo and 18 other areas until the end of September as health care systems remain under severe strain, although new infections have slowed slightly.

The current state of emergency, which was to end on Sunday, was issued first in Okinawa in May and gradually expanded. Despite the prolonged emergency, the largely voluntary measures have become less effective as the exhausted public increasingly ignores them.

Prime Minister Yoshihide Suga said serious cases remain high and are still overwhelming many hospitals. He called on the people to continue to work remotely and other social distancing measures “so that we can return to safe and prosperous daily lives.”

The extension will cover a period when Japan’s government is in transition. Suga has announced that he will not run in a September 29 race for his party’s leadership, and his successor in that race will likely become the next prime minister.

His government has faced sharp criticism over virus measures seen as too late and too small to be effective and for holding the Olympics despite public opposition during the pandemic.

“We need to stabilize medical systems and make sure that infections are steadily decreasing,” Economy and Fiscal Minister Yasutoshi Nishimura, who is in charge of Covid-19 measures, said earlier Thursday. He said tens of thousands of people are still recovering at home or in makeshift facilities with limited medical care.

The government, meanwhile, is studying a roadmap for easing restrictions around November when a large majority of the population is expected to be fully vaccinated, officials said. The easing of restrictions would allow fully vaccinated people to travel, gather for parties or attend mass events.

As of now, about 49 percent of the people have completed inoculations and the rate is expected to exceed 60 percent by the end of September, Nishimura said.

Japan has done much better than other developed countries in number of cases and deaths without having a lockdown, but the country has been struggling with new waves of infections propelled by more contagious new variants. Japan has reported about 1.65 million cases and 16,500 deaths. (AP)