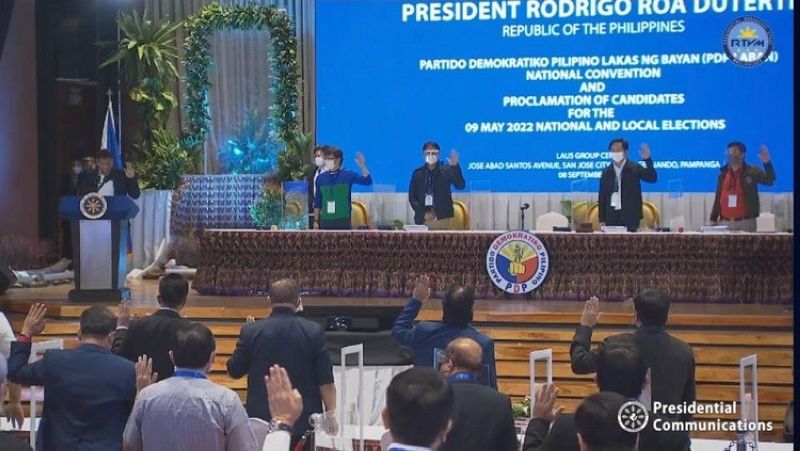 THE Partido Demokratiko Pilipino–Lakas ng Bayan (PDP-Laban) Cusi faction on Wednesday, September 9, 2021, emphasized that no government funds were used in the September 8 national convention of the party held at the LausGroup Event Centre along Jose Abad Santos Avenue in the City of San Fernando, Pampanga.

In an interview upon his arrival at the venue owned and operated by a private sector entity, Department of Interior and Local Government (DILG) Undersecretary Jonathan Malaya said the cost for the event, including venue and food, was paid for entirely by the party.

To ensure the health and safety of everyone involved, all participants were still required to undergo on-site antigen testing even if they have negative reverse transcription-polymerase chain reaction (RT-PCR) results in compliance to all applicable anti-Covid protocols. The antigen test is separate from the requirement for all participants to submit negative RT-PCR test results taken not more than 48 hours from the day of the convention.

Around 400 delegates attended the convention in person, allowing for adequate space for social distancing as the venue can accommodate as many as 2,500 persons. Under the omnibus guidelines of the Inter-Agency Task Force on the Management of Emerging Infectious Diseases (IATF), mass gathering is allowed in a province under modified general community quarantine (MGCQ) subject to limitations on operational capacity of up to 50 percent.

Malaya said while many of the members of PDP-Laban are government officials, the ruling party’s convention is not a government event and is subject to all the health protocols applicable within the province of Pampanga.

“This is not a government event therefore we are not exempted -- we are following all the protocols that are applicable for the province of Pampanga,” Malaya said, noting the province is under MGCQ.

San Jose Del Monte City, Bulacan was the original venue chosen for the event. However, Malaya said PDP Laban was forced to move the venue to Pampanga after the entire province of Bulacan was placed under modified enhanced community quarantine (MECQ) due to rising cases of Covid-19 infections.

Mass gathering is entirely prohibited in a province under MECQ

Duterte, the PDP-Laban Cusi faction chairman, said he accepted the nomination because of his love for the country.

“Thank you for the nomination. I am hopeful that this will allow me to continue serving the Filipino people,” he said during the party’s national assembly held in Pampanga.

The party has yet to announce their standard-bearer, although they earlier nominated Duterte’s former long-time aide, Senator Christopher Go.

In a statement, Go again declined the nomination. He did not attend the event.

He said he hoped the party will continue to respect his decision.

Go said he will continue to support the party and its candidates.