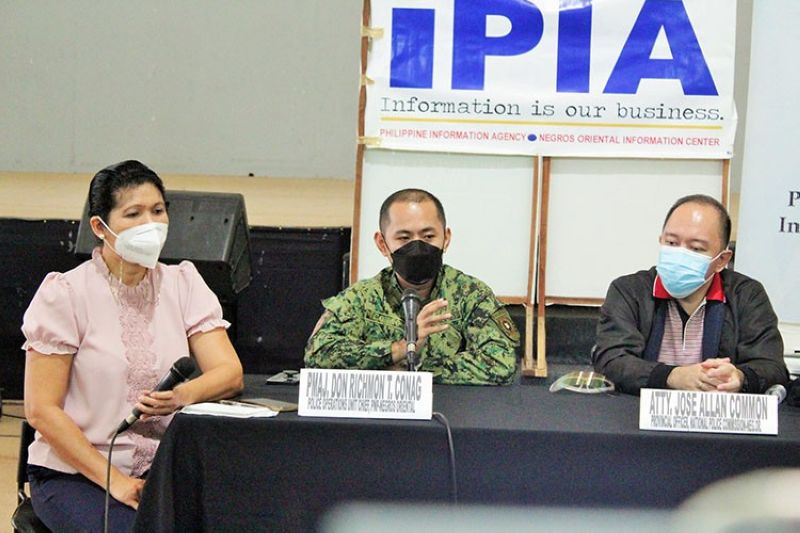 PMAJ. Don Rich Conag (2nd from left), chief of the Police Operations Unit of PNP - Negros Oriental said that crime incidents in the province during the said period went down from 4, 691 in 2020 to 4, 087 this year. This translates to around 12.4% reduction in the crime incidence rate for the province. (From: PIA Negros Oriental's Facebook)

DUMAGUETE CITY – The crime volume in Negros Oriental has dropped as of August this year compared to last year despite the lesser quarantine restrictions amid the coronavirus disease 2019 (Covid-19) pandemic.

Maj. Don Richmon Conag, acting provincial police operations officer of the Negros Oriental Provincial Police Office, in an interview Friday, said the total crime volume from Jan. 1 to Aug. 31 this year is at 4,087.

This is less than 604 crime incidents compared to last year for the same period at 4,691, he said.

Conag attributed the decline to increased police visibility, interventions, and other operations, as well as people’s cooperation due to the pandemic restrictions even though they are more relaxed this year.

People are staying at home these days and the quarantine restrictions, especially border control and other police operations, act as a deterrent to the commission of crimes, Conag said.

Negros Oriental is currently under general community quarantine with heightened restrictions until Sept. 30.

The police personnel strength in the province, on the other hand, is only 1,105, he added.

The current police to population ratio of 1:952 is, in fact, excluding police personnel detailed to offices, Conag said.

Nevertheless, he reassured the people that they are doing their best to continue with mobile patrols, beat patrols, checkpoints, and other interventions out in the streets to curb criminality.

While admitting there is a problem in the lack of police personnel, Conag said they do a weekly oversight meeting to assess crimes and make adjustments for the following week and adjust deployment to treat problems. (PNA)