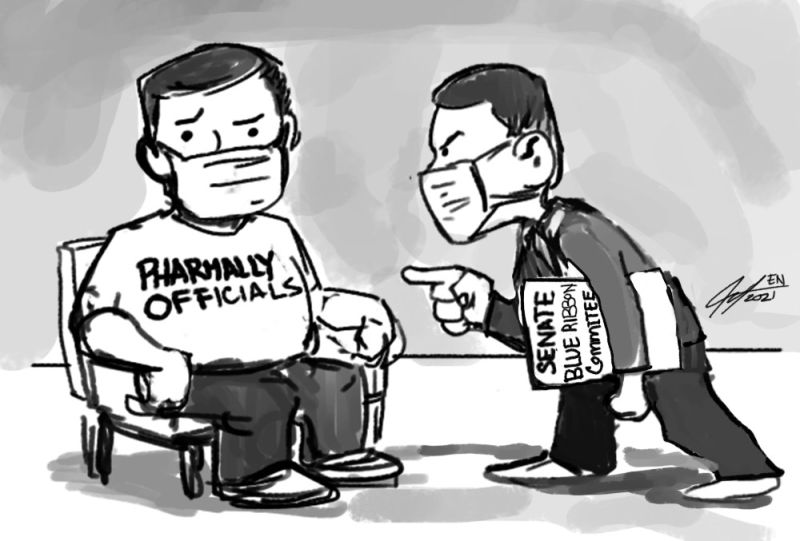 A CONGRESSIONAL investigation is a tool to aid members in legislation. The Senate blue ribbon committee has not given a clue so far as to what measures could come out of its examination of the Pharmally Pharmaceutical Corporation.

Despite there being no clear outcome at this point, I do not agree with claims that what the Senate blue ribbon committee is doing in questioning Pharmally officials is a waste of time and resources. Any misuse of my money or the people’s money, any corrupt act by persons elected to protect the interests of the public, should be investigated and the process pursued to its end.

How will the committee do it? The Senate blue ribbon committee is the Committee on Accountability of Public Officers and Investigations stated in Rule 10, Section 13 of the Senate rules. The committee has general jurisdiction over: “All matters relating to, including investigation of, malfeasance, misfeasance, and nonfeasance in office by officers and employees of the government, its branches, agencies, subdivisions and instrumentalities; implementation of the provision of the Constitution on nepotism; and investigation of any matter of public interest on its own initiative or brought to its attention by any member of the Senate.” The rules can be found at http://legacy.senate.gov.ph/.

Within 15 days after the end of its investigation, the committee shall begin the writing of its report. The report is expected to contain the proposed law or pieces of legislation as a result of the investigation.

The Senate blue ribbon committee headed by Senator Richard Gordon held its sixth public hearing Monday, September 13, 2021, on the 2020 report of the Commission on Audit (COA) on the budget utilization of the Department of Health (DOH) in the fight against the coronavirus disease (Covid-19). A highlight of its hearings was on the Pharmally corporation on the issue on alleged overpriced medical supplies.

President Rodrigo Duterte earlier defended Pharmally saying, “What is clear is that there was a contract, there was delivery” before the company was paid. But committee members wondered how Pharmally was able to get over P8.6 billion worth of government contracts in 2020 when it was only several months old and had just P625,000 in paid-up capital.

Will the Senate reduce the DOH budget? Will it strengthen the COA? Will it recommend the filing of criminal charges? Plunder?

It would help the public understand the ongoing investigation if the senators were to reveal the nature of the legislation they foresee would be the result of their actions.