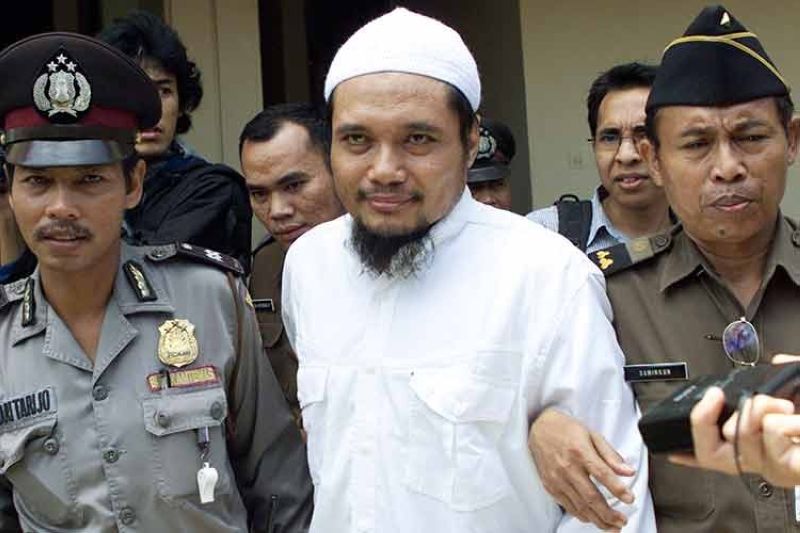 INDONESIA. Militant cleric Abu Rusdan (center) is escorted by security officers after his trial hearing at a district court in Jakarta, Indonesia, in this November 3, 2003 file photo. (AP)

JAKARTA, Indonesia -- Indonesia’s elite counterterrorism squad has arrested a convicted militant and suspected leader of an al-Qaida-linked group that has been blamed for a string of past bombings in the country, Indonesia police said Monday, September 13.

Abu Rusdan was seized late Friday in Bekasi near the capital of Jakarta, along with three other suspected members of Jemaah Islamiyah, police spokesman Ahmad Ramadhan said.

“He is currently known to be active among the unlawful Jemaah Islamiyah network's leadership,” Ramadhan told the Associated Press.

Indonesian authorities consider Rusdan to be a key figure in the Jemaah Islamiyah, which the US has designated a terrorist group. The shadowy Southeast Asian network is widely blamed for attacks in the Philippines and Indonesia — including the 2002 bombings in the Indonesian resort island of Bali that killed 202 people, mostly foreign tourists.

Ramadhan described the arrests as part of a broader nationwide crackdown on the group. Police are still searching for other suspected members, followed tips that the group was recruiting and training new members in Indonesia.

Born in Central Java, Rusdan, 61, was sentenced to jail in 2003 for sheltering Ali Ghufron, a militant who was later convicted and executed for carrying out the Bali bombings.

After his release from prison in 2006, Rusdan traveled Indonesia giving speeches and fiery sermons that received tens of thousands of views on YouTube. In one recorded sermon, he praised as the “land of jihad” Afghanistan — the country where he had previously trained with other militant groups.

Indonesia's police counterterrorism unit, known as Densus 88, has swept up 53 alleged members of the Jemaah in the past weeks, across 11 different provinces.

An Indonesian court banned the group in 2008 and a sustained crackdown by the country's security forces with support from the US and Australia has helped to weaken the militant network.

A spokesman for Indonesia’s National Intelligence Agency, Wawan Hari Purwanto, said in a video statement early this month that following the Taliban takeover in Afghanistan, officials have stepped up their efforts at early detection and prevention “particularly toward terrorist groups that have links to the Taliban’s ideology and networks."

Indonesia's counterterrorism crackdown has been ongoing for months already.

In the past year, Indonesian officials say counterterrorism forces have captured dozens of militants and suspected members of the Jemaah, including its alleged military leader, Zulkarnaen, who had been wanted for more than 18 years.