NPA admits to burning of backhoe 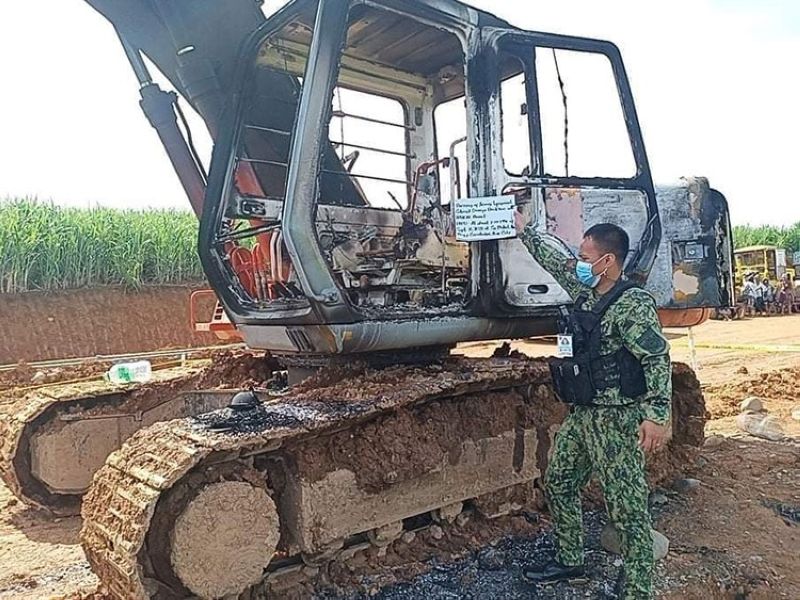 NEGROS. The backhoe torched by the suspected rebels in Barangay Carabalan in Himamaylan City over the weekend. (Contributed photo)

THE Mount Cansermon Command of the New People’s Army (NPA) South Central Negros (MCC-NPA) admitted Tuesday, September 14, that it was responsible for the burning of a P3.5-million backhoe in Barangay Carabalan, Himamaylan City on September 11, 2021.

Ka Dionesia Magbuelas, spokesperson of the Mount Cansermon Command NPA–South Central Negros, said in a statement that the incident was “a reminder to the ruling class not to engage in destructive and harmful economic activities.”

The backhoe is owned by the ESJ Construction, the contractor of the road concreting project linking Barangay Carabalan and Tayasan town Negros Oriental.

Magbuelas said the road construction is meant to pave the way for the entry of multinational mining companies and other big businesses targeting the estimated 1,100 hectares of Tribu Itoman-Maghat-Bukidnon lands.

She stressed that what the elite calls “development projects” are detrimental to the poor peasants and the ancestral domain of the Indigenous Peoples (IPs), particularly in the mountain ranges and forest lands of Cambantog, Trukat, Tahod Ilajas and Cansermon in the boundaries of Binalbagan town and Himamaylan City in Negros Occidental and La Libertad and Tayasan towns in Negros Oriental.

Magbuelas claimed that through the years of development, aggression had threatened ancestral lands of the tribe in the hinterlands of Himamaylan City.

For his part, 94th Infantry Battalion (IB) commander Lieutenant Colonel Angelo Guzman said they are still investigating if the suspects are indeed members of the NPA, in coordination with the Himamaylan City police.

While the rebels burnt the backhoe, they did not destroy other heavy equipment in the area.

Himamaylan Mayor Raymund Tongson said the case is isolated and that they are waiting for official report of authorities about the suspects.