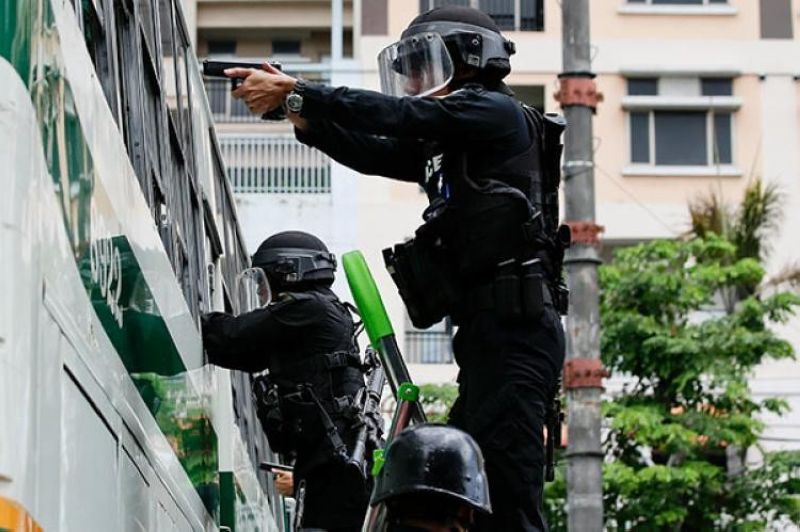 MANILA. In this file photo taken during a simulation exercise in 2018, Philippine National Police personnel show their capability to respond to a terror attack. (File)

THE Philippine National Police (PNP) and the Armed Forces of the Philippines (AFP) on Wednesday, September 15, 2021, said they were validating the information received by the Japanese government about possible terror attacks in six Southeast Asian countries, including the Philippines.

Both PNP Chief Guillermo Eleazar and Department of Defense (DND) spokesperson Arsenio Andolong said they have not received similar intelligence reports, but were not discounting the possibility.

“But this does not mean that we would lower our guard on this matter,” Eleazar said.

He said they were continuously monitoring intelligence reports from the ground and from counterparts in foreign intelligence units.

He also said all police units have been alerted to possible spillover of Afghanistan hostilities since the Taliban takeover in late August.

Andolong, for his part, said the DND and the armed forces have been on a constant state of heightened alert against any terroristic activities since the battle in Marawi City in 2017.

“As with all reports concerning the safety and security of our communities, the aforementioned advisory will be subjected to the process of validation,” he said.

“We are working closely with other relevant government agencies and instrumentalities such as the Anti-Terrorism Council to continuously monitor and assess terror threats within our borders all year round,” he added.

Both officials urged the public to immediately report any suspicious individuals who may pose a security threat.

The Japanese government did not elaborate on the alleged threat, but urged its citizens to avoid “western-owned” hotels, restaurants and religious sites. (SunStar Philippines)