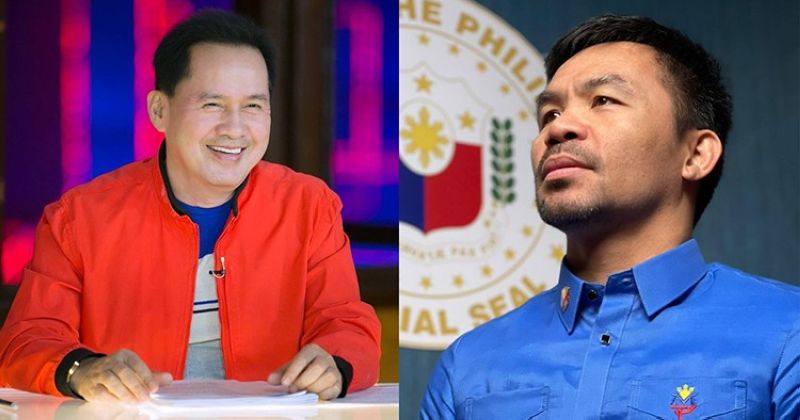 THE camp of Kingdom of Jesus Christ founder Pastor Apollo Quiboloy denied that the pastor made an accusation against Senator Emmanuel "Manny" Pacquiao, who filed a P100-million cyberlibel complaint against the religious leader.

Pacquiao on Tuesday, September 14, 2021, filed libel and cyber-libel charges against Quiboloy who claimed that the senator misused public funds for a project in his hometown in Sarangani province.

Pacquiao filed his complaint before the Makati Prosecutor’s Office, accusing Quiboloy of “using his power and influence to spread fake news and false information.”

The boxer-turned-senator is seeking P100 million in damages plus attorney’s fees.

In a press statement on Tuesday evening, Quiboloy's camp said they have yet to receive the copy of the cyberlibel complaint. But they said the pastor "is ready to respond to the accusations against him."

"We maintain that every citizen has the right to inquire, to hear, to speak and make commentaries about the actions of public officials," the KJC Legal Counsel said.

"The interest of society and the maintenance of good government demand a full discussion of public affairs. In a democratic society, public officials like Senator Manny Pacquiao should expect criticisms and critical evaluation of their performances from the citizens whom they are expected to serve,” the legal team added.

"In fact, he never made any accusation against the good Senator, but only floated a question regarding that matter on behalf of the people who wanted answers," the KJC camp said.

They said Pacquiao's complaint may be considered "retaliatory and a political move on his part" since the senator is reported to run for the upcoming national elections.

"...and we shall do all within our power to ensure that this complaint will not curtail what is a constitutionally protected speech and expression," Quiboloy's camp said.

The legal team said they will file a counter-affidavit once they receive a copy of the complaint.

Pacquiao’s complaint stemmed from a video clip posted on social media, which showed Quiboloy saying that Pacquiao funded the unfinished Sarangani Sports Training Center for P3.5 billion. He showed the dilapidated bleachers and overgrown grass in the facility.

Quiboloy, a staunch supporter of President Rodrigo Duterte, said during his appearance on his television station SMNI and on social media that Pacquiao was himself involved in corruption.

The pastor released the video after Pacquiao said there was widespread corruption in the government.

Pacquiao said the P3.5 billion mentioned by Quiboloy was appropriated for the Philippine Sports Training Center in Bataan. He said he has nothing to do with this.

Quiboloy took a swipe at the senator in his recent TV program on September 8, saying ”Stop! No one will believe you.” (RGL with reports from SunStar Philippines)