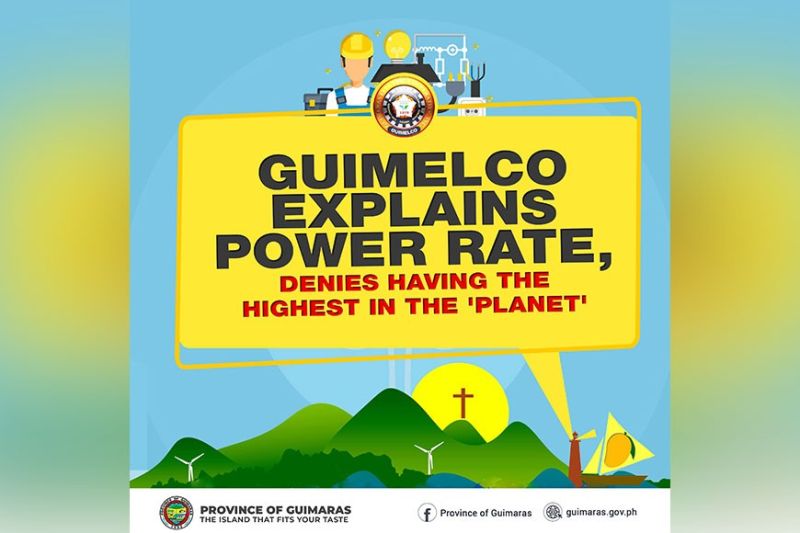 GUIMARAS Electric Cooperative (Guimelco) has responded to accusations that it has the highest power rate imposed on consumers, compared to other power distributors in the country.

The power distributor asserted that these allegations are baseless and malicious as their effective rate for the month of August 2021 is P9.9694 per kilowatt hour (kWh) for residential consumers and P8.5223 per kilowatt hour at low voltage.

According to Guimelco, these irresponsible and unfair accusations against them are part of the tactics of some personalities to advance their political agenda.

Based on Energy Regulatory Commission (ERC) 2020 data, Guimelco’s power rate is within the median of all power distributors in the country.

In fact, according to Guimelco, for five years, they have not charged their consumers more than P13 per kWh.

Guimelco stressed that the electricity rate they are imposing is approved by the ERC through Resolution 20, series of 2009.

Such resolution determines the allowable charges that can be passed on by the power distributors to the consumers.

It added that one of the main reasons for the fluctuating electricity rate is the generation charges that do not only affect Guimelco but other distribution utilities in the country as well.

Guimaras Electric Cooperative insisted that they have no control over the generation charge imposed because power generators determine it.

The generation charge, according to Guimelco, depends on various factors such as supply and demand, cost of electricity in the spot market and fuel cost.

Guimelco also responded to accusations that it does not directly supply power to the Guimaras Wind Farm.

It said the ERC decided that the supply from Guimaras Wind Farm will go directly to the Visayas Grid through the transmission system of the National Grid Corporation of the Philippines, which the ERC sees as the most effective way for the distribution of the energy generated from the wind farm.

The electric cooperative insisted that their average generation rate from January to August this year is at P5.1729 per kilowatt hour.

Guimelco added that of what they charge from consumers, only the distribution, supply and metering charges go to the cooperative, which is only equivalent to about 25 percent of the bill paid by consumers.

A large portion of the amount collected from the consumers is paid to their power suppliers, NGCP, and the government. (PR)