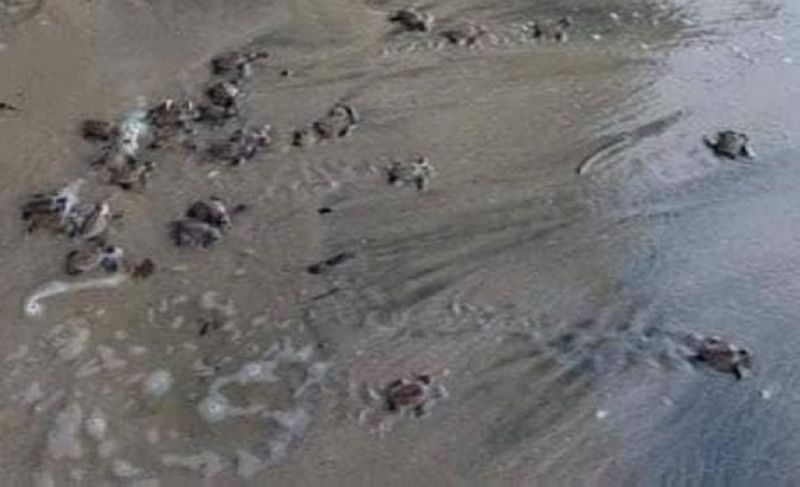 OLIVE RIDLEY HATCHLINGS. Personnel of the Community Environment and Natural Resources Office (Cenro) in Liloy, Zamboanga del Norte, recently released 28 olive ridley turtle hatchlings at the bay area of Banigan village. A photo handout shows the turtle hatchlings rushing to the shore as they were sent back to their natural habitat.

The turtle hatchlings were sent back to their natural habitat at the bay area of Banigan village, Liloy, according to Department of Environment and Natural Resources (DENR) regional information officer Rosevirico Tan.

Tan said Wednesday, September 15, 2021, that a team of Cenro-Liloy immediately responded for the proper handling and safe release after Rey Proposero, a concerned resident of Banigan village, informed them of the presence of the turtle hatchlings in the bay area.

He said personnel of Cenro-Liloy have installed signages of Republic Act 9147 or the “Wildlife Resources Conservation and Protection Act” to generate information, ensure the protection and safeguard the nesting sites in the area.

Tan said the International Union for Conservation of Nature listed the olive ridley turtle as vulnerable due to multiple threats to its population, facing a high risk of extinction in the near future.

He said the DENR regional office encourages everyone to report any wildlife recovered in their area to the nearest Cenro through the hotline number 0948-147-1250 or message them on their official Facebook page, DENR Zamboanga Peninsula. (SunStar Zamboanga)