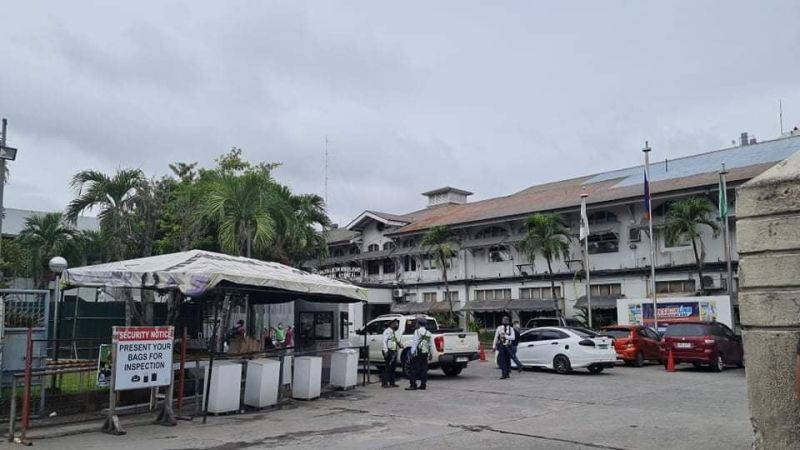 BACOLOD. Most hospitals in Bacolod City including the Corazon Locsin Montelibano Memorial Regional Hospital are currently undermanned because of the increasing number of Covid-19 patients. (Erwin P. Nicavera photo)

THE Bacolod City Emergency Operation Center-Task Force (EOC-TF) is now coordinating with the Department of Health (DOH)-Western Visayas to send 50 more healthcare workers for augmentation as the city battles a surge in coronavirus disease (Covid-19) cases.

Dr. Chris Sorongon, deputy for medical data and analysis of EOC-TF, said Wednesday, September 15, 2021, that most of the hospitals in the city are no longer accepting patients infected with Covid-19.

Sorongon said some hospitals already reached the maximum bed capacities for Covid patients, while others lacked manpower to take care of the patients.

He added that Mayor Evelio Leonardia called for an emergency meeting with representatives from DOH-Western Visayas to address the situation.

The management of Corazon Locsin Montelibano Memorial Regional Hospital (CLMMRH), in a statement, earlier admitted that for the first time in the last 18 months of addressing the Covid-19 pandemic, the government-run hospital is highly challenged with the current surge in cases.

The hospital management added that it is also temporarily suspending admission even for non-Covid patients until further notice.

The same scenario is happening at the Riverside Medical Center Inc. (RMC) as they earlier announced that they will temporarily stop admitting Covid-19 patients and those who are exhibiting symptoms of the disease.

The hospital stressed that they have the equipment but do not have sufficient workers to take care of the patients.

"Our hospitals now really need augmentation, as much as our hospitals would like to open additional beds [for Covid patients] they really need personnel to man these beds," Sorongon said.

Aside from nurses and others, hospitals in Bacolod also need additional equipment and medicines for Covid patients, he added.

Sorongon noted that currently, only three hospitals in Bacolod City have available beds for Covid patients.

The EOC-TF is also coordinating with the Philippine Red Cross, Philippine Army and other government agencies for the establishment of modular tents where Covid patients can be treated.

The Bacolod City Government continues to intensify its vaccination campaign to shorten the surge of Covid cases since most of the patients were unvaccinated.

Meanwhile, one of the nine Bacolod residents, who earlier tested positive for the Delta variant of Covid-19, died last week, EOC records showed.

Sorongon said the fatality is a resident of Barangay Mandalagan.

The eight others along with their close contacts yielded negative for the virus as indicated in the results of their repeat swab released on Monday, September 13.

The eight residents initially underwent swab tests on August 18 and their samples were sent to the Philippine Genome Center (PGC).

The PGC released their findings on September 12, showing that they were infected with the Delta variant.

EOC-TF Executive Director and City Administrator Em Ang said the big factor in the rise of Covid-19 infections were the Delta variant cases because it could infect an entire household.

She said the measures to prevent the spread of the virus have been intensified in the city through the implementation of rigid contact tracing and isolation of the Covid patients.

Mayor Evelio Leonardia also expressed concern over the significant rise in the number of infections for the past five consecutive days.

He said the presence of the Delta variant in the city is another reason to be alarmed as it is more contagious and deadly.

Sorongon said Bacolod City will receive Thursday an additional 25,000 doses of Sinovac vaccines from the national government and 30,000 doses of AstraZeneca vaccines.

This is part of the 360,000 doses purchased earlier by Bacolod City using local funds.

He said the vaccines will be administered to medical health workers, senior citizens, persons with comorbidity, essential workers and indigent residents.

Sorongon reiterated that Bacolodnons should avail of the vaccine because those who are hospitalized are those who have not been vaccinated.