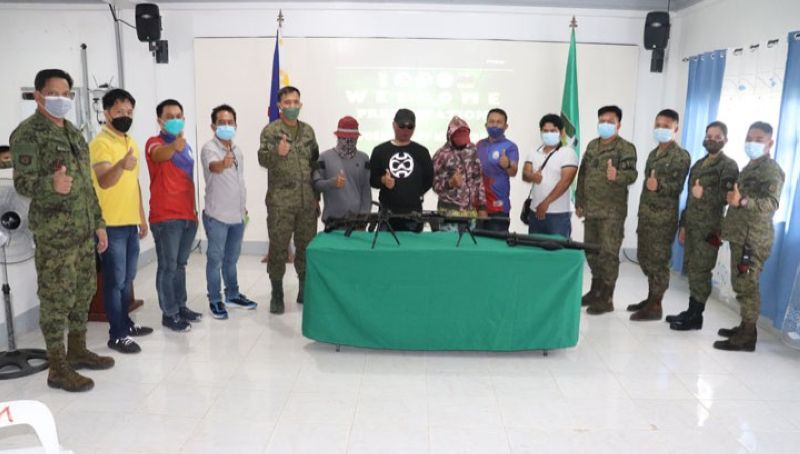 BIFF SURRENDERERS. Three members of the Bangsamoro Islamic Freedom Fighters surrender hand over their firearms to the troops of the 92nd Infantry Battalion on Tuesday, September 14, in Maguindanao. A photo handout shows the three surrenderers (faces covered with masks and wearing baseball caps) together with military and municipal government officials making a thumbs-up sign during a souvenir photo at the Old Capitol in Satan village, Shariff Aguak, Maguindanao. (SunStar Zamboanga)

ANOTHER three members of the Bangsamoro Islamic Freedom Fighters (BIFF) surrendered and handed over their firearms to the troops of the 92nd Infantry Battalion (IB) in the province of Maguindanao, officials announced Thursday, September 16, 2021.

Patrimonio identified them only through their aliases as Alias Nasser, Alias Munib and Alias Bensar, who are followers of the BIFF Karialan and Bungos factions.

They handed over one 7.62-millimeter (mm) Sniper rifle, one 5.56-mm Ultimax Sub-Machine Gun, and one rocket-propelled grenade, according to Patrimonio.

The three BIFF surrenderers have received financial assistance from the municipal governments of Shariff Aguak, Datu Hoffer, and Datu Unsay.

Major General Juvymax Uy, Joint Task Force-Central commander, commended the troops and the local government officials for the good aftermath of their strong collaboration and coordination.

Major General Generoso Ponio, Western Mindanao Command acting commander, said the breakthrough in the campaign against terrorism and violent extremism is attributable to the holistic approach embraced by the Armed Forces of the Philippines and the unwavering support of the communities.

They will subsequently be enrolled in the reintegration program of the government.

With the surrender of the three, the number of BIFF members who surrendered in Central Mindanao area has increased to 108. (SunStar Zamboanga)