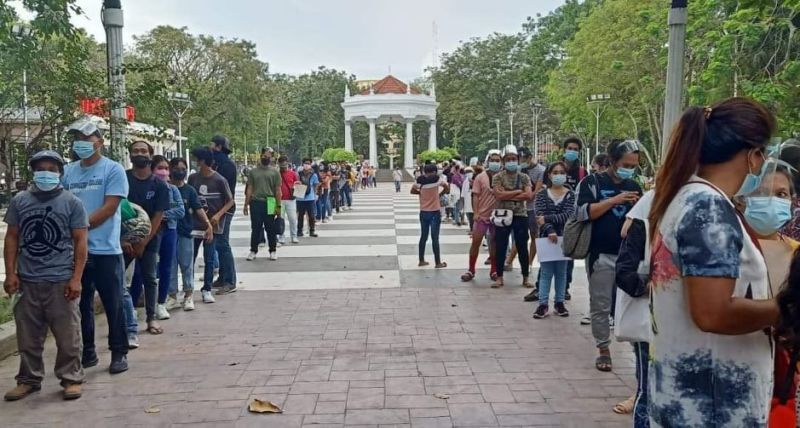 BACOLOD. A long queue of people lining up from the public plaza to the Comelec-Bacolod Office on San Juan Street to process their voter registration was already observed as of 6 a.m. Thursday, September 16. (Teresa D. Ellera photo)

THE Task Force Disiplina has warned residents who are lining up at the Commission on Elections (Comelec) office in Bacolod City and its surrounding vicinity for voter registration to follow minimum heath protocols to avoid penalties.

He said Comelec can only accommodate at least 300 registrants daily, but thousands of registrants flocked to the office of the agency.

“We want to ensure that they are observing social distancing as well as wearing face mask and shields,” Geolingo said.

For the first offense, he said, they are reprimanding those who violate the protocol, but if they committed the same violations, "we will penalize them."

Geolingo said some of the registrants were staying near the Comelec office from 2 a.m., waiting for the agency to open so they could get a priority number.

Provincial Election Supervisor Ma. Fatima Aspan, who was assigned as acting election officer of Comelec-Bacolod on Monday, September 14, could not be reached for comment.

Geolingo said based on the city ordinance authored by Councilor Archie Baribar on the mandatory use of face masks, the violator will be fined P200 and P300 for non-residence of Bacolod.

Those who failed to pay the penalty will be required to do eight hours of community service in the barangay where they reside.

Section 3 of the ordinance states that all persons in public places shall be required to wear face masks. The same shall be required even of occupants inside public or private vehicles as well as persons inside private office/place where a member of the general public may be allowed access.

All persons shall observe social distancing in all public places, private or public vehicles and private places where the public may be allowed.

Geolingo said from September 1 to 15, more than 100 persons in Bacolod City were penalized for not wearing face masks and face shields, and not observing physical distancing.