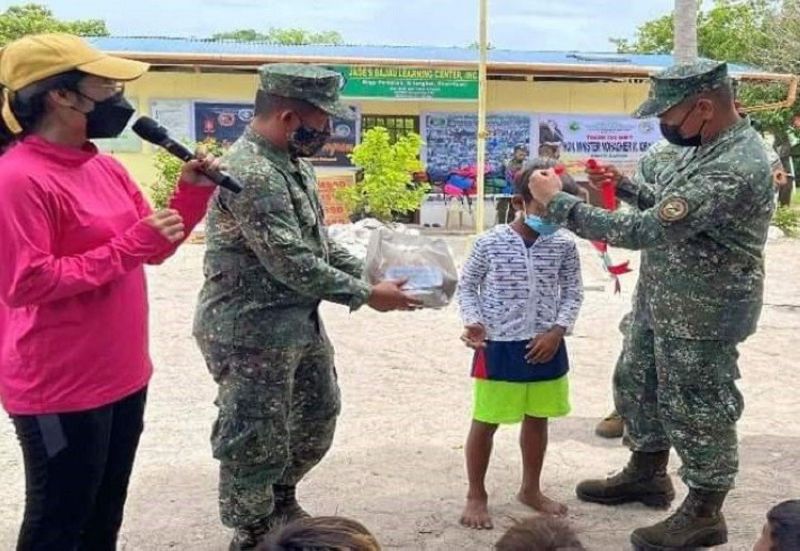 BAYANIHAN. The Joint Task Force (JTF)-Tawi-Tawi together with the municipal government of Sitangkai conduct last week an “All-In-One Bayanihan” activity in Pangguan village. A photo handout shows marine troops giving a hygiene kit to a Badjao child during the activity. (SunStar Zamboanga)

COLONEL Romeo Racadio, Joint Task Force (JTF)-Tawi-Tawi, has encouraged the families of Badjaos in Sitangkai, Tawi-Tawi to motivate their children to go to school.

Racadio made the call as the JTF-Tawi-Tawi together with the municipal government of Sitangkai conducted last week an “All-in-one Bayanihan” program in the island town.

(Motivate your children to go to school. It is the key towards success, so that they will not be criticized by others.)

Racadio, together with other officers of the task force, village officials and municipal government officials of Sitangkai distributed school bags, relief packs and hygiene kits to the residents of Pangguan village.

Racadio explained that the All-in-One Bayanihan Program aimed at extending help to the marginalized people in the society such as the Badjao community that usually experience social discrimination, unjust treatment, and exclusion in the community due to differences in race, education and culture.

He said the sustained collaboration and commitment of all the participating agencies in providing the Badjao Sinama tribe with the basic services will eventually uplift and alleviate their way of life.

Racadio said after marine troops were deployed to secure Pangguan Island in 2017 and through the philanthropic initiatives of Mr. and Mrs. Eliazar Erana, the Jade Bajau Learning School Incorporated was established to cater to the literacy needs and reach the potentials of the marginalized Badjaos, who have been vulnerable to the exploitation of lawless elements in such geographically isolated and deprived area.

He noted that the island, due to its strategic location, used to be a traditional planning and execution area of the Abu Sayyaf bandits’ kidnapping activities.

“We always want to ensure that the vulnerable group of the society is protected from the infiltration of the enemies of the state,” said Major General Generoso Ponio, Western Mindanao Command acting commander. (SunStar Zamboanga)