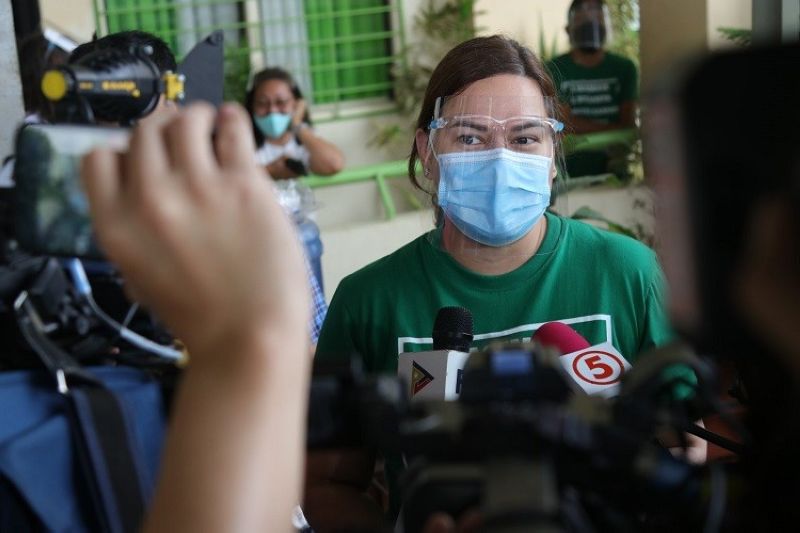 DAVAO City Mayor Sara Duterte-Carpio will run for the 2022 elections, but as a reelectionist for the same post.

This was confirmed to SunStar Davao by Duterte-Carpio's spokesperson, Liloan Mayor Christina Frasco, in a text message on Thursday evening, September 16, 2021.

"Yes, this is confirmed. According to Mayor Sara, she will run for reelection as Davao City mayor," Frasco said.

Frasco also confirmed that incumbent Vice Mayor Sebastian Duterte will be running for the same post in 2022.

Duterte-Carpio also confirmed this to the media during her visit at the Bakuna By the Sea vaccination activity a" the Waterfront Hotel on Friday afternoon, September 17.

"I can confirm the announcement of Mayor Frasco," she said.

She also confirmed that her brother Sebastian will be the "overall organizing person in the joint campaign of her regional party Hugpong ng Pagbabago (HNP) and Hugpong sa Tawong Lungsod (HTL), as agreed by party members."

Meanwhile, the mayor was joined by Senator Sherwin Gatchalian to personally thank the vaccination organizers and medical workers for facilitating the vaccination event, which aims to vaccinate an estimated 25,000 economic frontliners.

Duterte-Carpio confirmed that she and Gatchalian discussed politics during their lunch.

"Kapag magkakasama ang mga politicians, politics really dini-discuss 'yan (When politicians get together, it is expected that there will be politics in the discussion)," she said. However, she declined to divulge further their discussion.

She also did not directly respond to the question of a possible "switching" in the presidential nominations, as what happened to her father, President Rodrigo Duterte during the 2016 elections.

Gatchalian, in a separate interview, also declined to divulge the politics-related discussion with the President's daughter.

Duterte-Carpio already declared that she won't be running for the highest electoral position despite calls from her supporters.

Instead, she urged them to back the vice presidential bid of her father, who recently accepted the nomination of his party, Partido Demokratiko Pilipino-Lakas ng Bayan (PDP-Laban), to be its official candidate for the 2022 polls.

(Let us show to him our strongest support for his decision to run for vice president.)

However, the mayor's supporters are not giving up yet.

Citizens group Hugpong Para kay Sara on Thursday, September 16, said they will use the remaining days prior to the filing of certificate of candidacy in October to convince President Duterte to give up his plan to run for vice president.

Davao Occidental Governor Claude Bautista, one of the members of Ituloy ang Pagbabago Movement also said there is still more time before the elections.

Davao del Norte Governor Anthony del Rosario, HNP secretary general, said in a previous text message, that Duterte-Carpio is expected to decide on her political plans for 2022 in time for the filing of the certificate of candidacy.