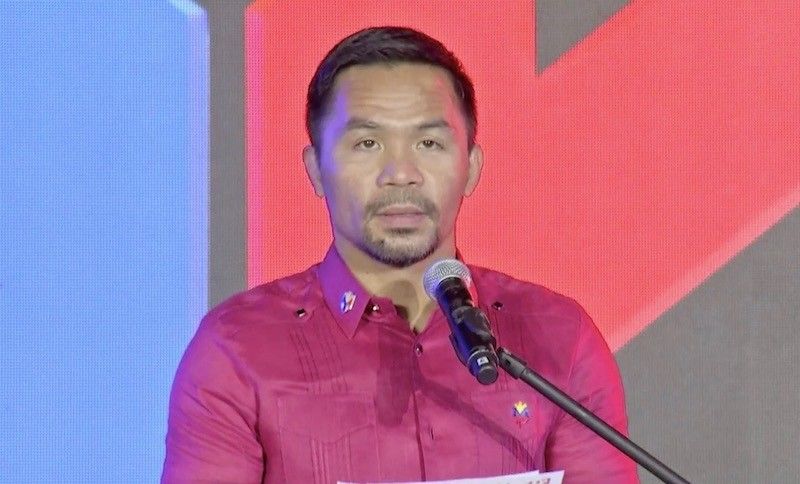 Pacquiao, who is the party president of their faction, accepted the multiple nominations made by party representatives across the country.

"Mga kababayan, we need progress. We need to win against poverty. We need government to serve our people with integrity, compassion and transparency," he said.

“The time is now — ngayon na ang panahon. We are ready to rise to the challenge of leadership," he added.

He said the party’s strength “lies in the trust of our people.”

The party also delegated to Pacquiao the task of choosing his vice presidential candidate.

In his speech at the beginning of the assembly, party chairman Senator Aquilino “Koko” Pimentel III said there is a high probability that their candidates will win in the 2022 elections and the “tunay na (genuine) PDP-Laban” will run the government.

“Today, we formally fight back against the hijackers,” Pimentel said during their national assembly Sunday, apparently referring to the Alfonso Cusi faction chaired by President Rodrigo Duterte.

The party also adopted a resolution bestowing the highest honors to the late former Senate president Aquilino “Nene” Pimentel Jr., one of the party’s co-founders.

Pimentel said the assembly was “constitutionally protected” and preceded by various virtual conferences with chapter leaders as part of “consultative and participatory democracy.”

Out of 193 members, 78 were physically and virtually present during the assembly which was live-streamed over the Manny Pacquiao Facebook page.

Ron Munsayac, chairman of the public information committee, said at the start of the assembly that all 10 Zoom accounts which can accommodate 1,000 each was already full. He said the secretariat was directed to create more Zoom accounts to allow those in the waiting room to attend.

The Cusi faction earlier nominated Duterte as its vice presidential candidate for 2022.

No one was nominated as presidential candidate, but Cusi earlier floated the name of Senator Christopher Go, Duterte’s former long-time aide. Go said he had no plans to run for president.

The Commission on Elections (Comelec) en banc has yet to decide which faction to recognize for the 2022 elections, but spokesperson James Jimenez said the conflict will likely continue and reach the Supreme Court. (Marites Villamor-Ilano / SunStar Philippines)