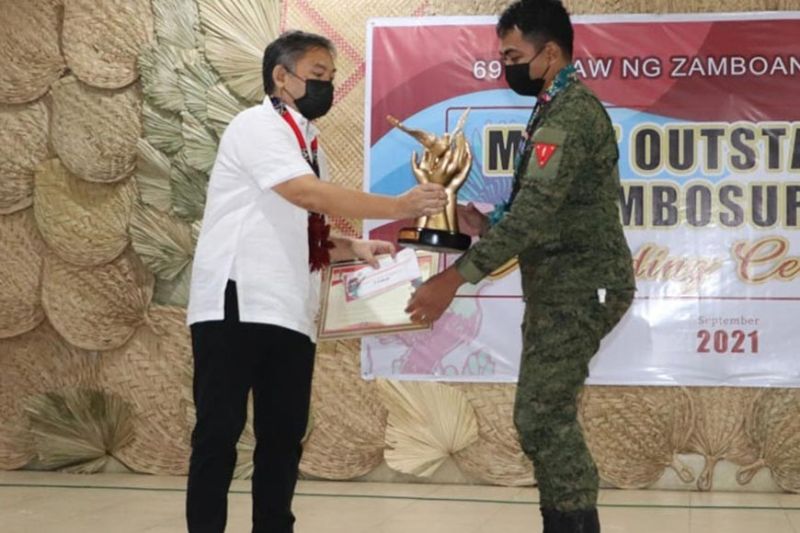 OUTSTANDING ZAMBOSURIANS. The provincial government of Zamboanga del Sur accords recognition to four 'Matapat' troops Most Outstanding Zambosurians Friday, September 17, 2021, in celebration of the 69th founding anniversary of the province. A photo handout shows Zamboanga del Sur Governor Victor Yu handing over the plaque and mementos to one of the four awardees. (SunStar Zamboanga)

THE provincial government of Zamboanga del Sur has accorded recognition to four “Matapat” troops Friday, September 17, 2021, in a simple ceremony in strict compliance to protocols amid the health pandemic.

The awarding of the Most Outstanding Zambosurians was part of the 69th founding anniversary of the province of Zamboanga del Sur on Friday.

Zamboanga del Sur Governor Victor Yu led the awarding ceremony hell at the Mindanao Hall of the provincial government center in Dao village, Pagadian City, the capital of the province.

The Awardees were: 2021 Most Outstanding Company Grade Officer—First Lieutenant Jonathan Cernitchez for his accomplishments as Charlie Company Commander and Operations Officer of 53rd Infantry “Matapay” Battalion (IB); 2021 Most Outstanding Field Officer—Second Lieutenant George Yu, Jr. for his accomplishments as Civil-Military Operations of the 53IB; 2021 Most Outstanding Enlisted Personnel—Sergeant Jesel Laniohan for his contributions as Civil-Military Operations Non-Commissioned Officer of Bravo Company, 53IB; and 2021 Citizen Armed Force Geographical Unit Active Auxiliary of the Year—CAA Narson Tulay for his contributions to the Intelligence Platoon of the 53IB.

They were awarded special recognition for their commitment to help and maintain lasting peace and order, leading to the declaration of Zamboanga del Sur as “insurgency-free and ready for further development.”