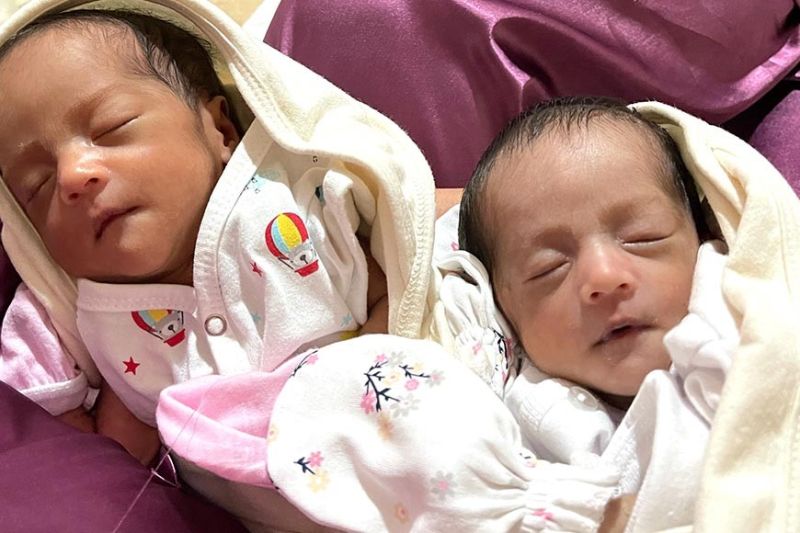 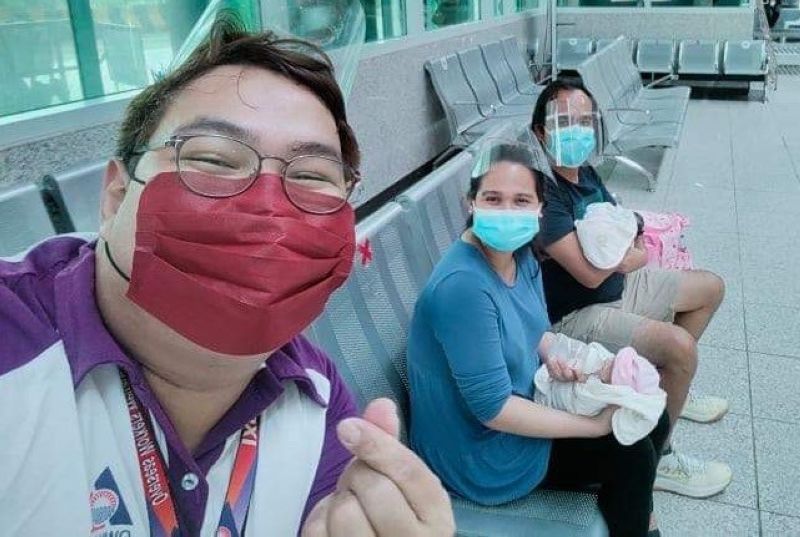 GOING HOME. Couple James Daniel and Joy Ann Manalo with their twins and the ‘house parent’ from the Overseas Workers Welfare Administration Davao Region just before their departure on a sweeper flight to Manila. (Owwa-Davao) 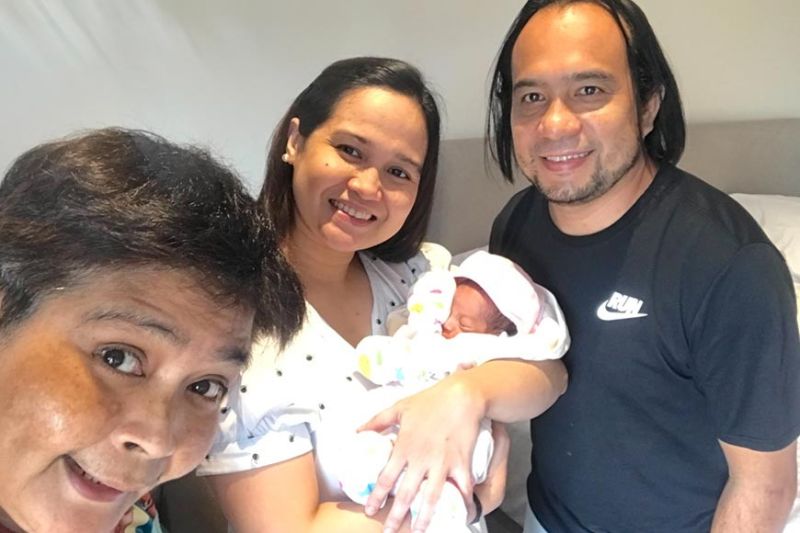 GETTING TO KNOW EACH OTHER. The writer during a visit at the couple’s hotel before they left Davao. (Photo by Stella Estremera) 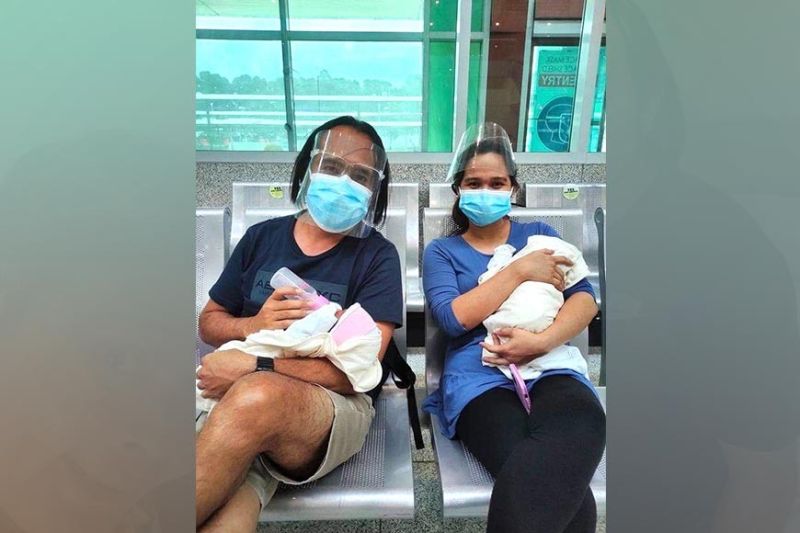 ALL SET TO GO HOME. At the pre-departure area before the sweeper flight to Manila last September 13, 2021. (Owwa-Davao) 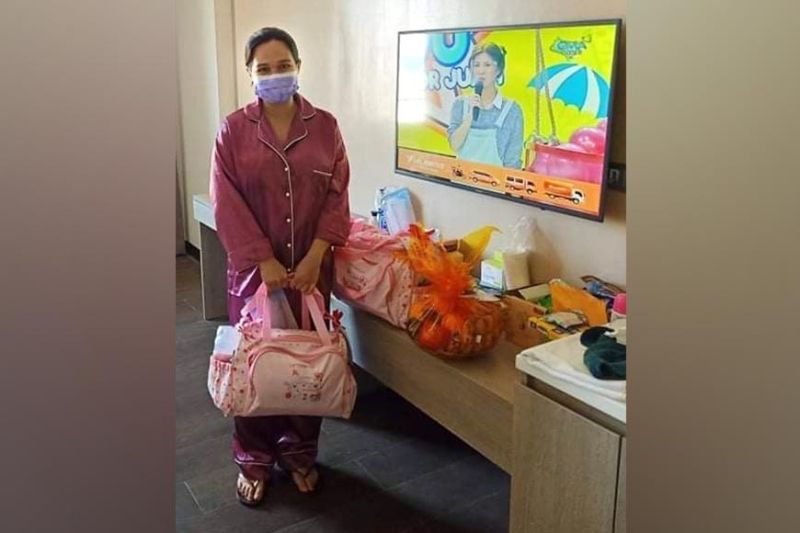 HAPPY RECIPIENT. Joy Ann receiving the gifts from the people of Davao City. (Photo by CTOO) 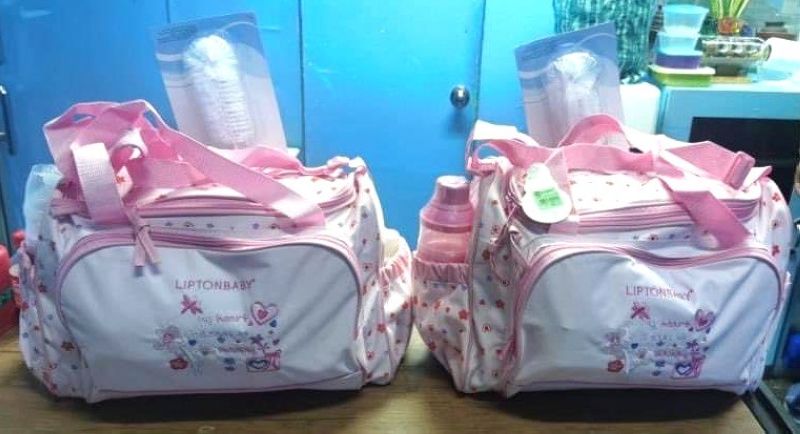 FROM THE PEOPLE OF DAVAO CITY. Two bags of infant needs were given in behalf of the People of Davao City by the City Tourism Operations Office. (Photo by CTOO)

WHEN everything’s gloomy with the Covid-19 surge hitting too close to home and those tested positive in Davao Region are nearing a thousand daily, how a pregnant repatriated overseas Filipino worker (OFW) landed in Davao and the pleasant experience she has had all throughout her medical emergency brings a ray of sunshine. No. Make that two rays of sunshine. Twin preemies named Ella and Elle.

Before the twin girls made their premature arrival at 31 weeks and four days on August 20, 2021, Joy Ann L. Manalo, a government nurse in Oman, was just one of the 335 OFWs and dependents who arrived from Muscat, Oman at 3:20 a.m. of August 11, 2021, at the Francisco Bangoy International Airport onboard Cebu Pacific flight 5J029.

Joy Ann said she applied online in Oman for the repatriation flight in preparation for her giving birth. As there is a travel ban to and from Oman, only those qualified for repatriation are accommodated, Owwa said.

These are those who have medical conditions who may need immediate medical care in the Philippines, pregnant women in their third trimester with a compelling reason to return home, those who have approved Oman Ministry of Labor waiver, and those who have been terminated or have completed their employment.

Getting pregnant was planned. Her husband James Daniel said he agreed to let her go abroad to work, her first time to be an OFW, on the condition that they will try to make a baby. Their boys are already in their early teens, a girl would be a welcome addition. What wasn’t planned was that they will get twin girls who will be born in a city they’ve never been to before.

An OFW since 2019 working for Oman’s Ministry of Health and assigned at the Bidiyah Hospital in the village of Aldaser in Ash Sharqiya, 197 kilometers from Oman capital Muscat, her last flight home was for a Christmas break in 2020. She did not expect to find herself in Davao City on the seventh month of her pregnancy.

“They landed and were quarantined in Davao because hotels for quarantine in Manila were already full and the flight can’t also be accommodated in Naia (Ninoy Aquino International Airport),” said Overseas Workers Welfare Administration Davao Region labor communications officer Maricel Sarabillo. Repatriation flights that land in Davao City are all from restricted countries.

Joy Ann said the babies in her womb were unusually active even when still on the flight and after she landed in Davao where she and her fellow OFWs were brought to a hotel to observe their 14-day quarantine before heading home.

“It must be the stress. I was also billeted on the eighth floor when the earthquake hit,” she said of the 7.3 magnitude earthquake with an epicenter in the City of Mati, Davao Oriental at 1:46 a.m. of August 12.

When she started having contractions on August 20, hotel staff were quick to assist her and called 911, giving her a first-person experience of this emergency medical service unique to Davao. She was impressed.

In mere minutes, she said she was already in an ambulance on the way to Southern Mindanao Medical Center (SPMC). The babies were born via caesarian section at 31 weeks and four days, classified as “very pre-term” babies. Moderate to late pre-term babies are born between 32-36 weeks. A full-term baby is born between 37 to 40 weeks.

“This was God’s will. God had a reason why I arrived and gave birth here,” Joy Ann said.

That she had to be in the Covid ward since she had not completed her quarantine, however, gave her a scare. Especially because she gave birth on a Friday, and her husband arrived only on Saturday night, meaning, she could not be discharged immediately as hospital policy requires birth registration before she can go. James can only do that during office hours on Monday. Aside from that, everything was a breeze.

Joy Ann hails from Candelaria, a 1st class municipality in the province of Quezon in Calabarzon Region, with a population of 137,881 people (2020 Census). Her husband James Daniel is also a nurse there. Being a first-class municipality, it only has a district hospital as its main government medical facility and the biggest private facility is a 60-bed secondary hospital.

SPMC has the Institute for Women and Newborn Health (IWNH), housed in a building of its own with facilities comparable to private hospitals.

The biggest surprise that James had was getting a zero-bill when his wife was discharged on August 23. Expecting to pay a huge amount because it was a caesarian birth and the babies had to be placed in the NICU to gain more weight before discharge, James said, they applied Joy Ann for medical assistance or MAP from Owwa, which provides for up to P50,000 medical assistance. With Joy Ann’s confinement from August 20 to 23 and the babies at the NICU, he expected to be paying some.

“Nakita naman sa bill na under MAP nga, pero zero-zero (The bill said it was issued under MAP, but we still got zero billing),” he said.

SPMC, being a tertiary government hospital, provides free medical services and only around 10 percent of its clients are paying.

Premature babies have to weigh at least 2 kilos to be discharged. The twins were born weighing 1.6 and 1.8 kilos that dropped to 1.4 and 1.5 kilos ten days later.

Joy Ann said she was told that a drop in weight is normal among preemies, they just have to fatten them up again. Good thing she could pump enough milk.

The family was accommodated in a sweeper flight last September 13, 2021 at 9 p.m. and arrived home in Candelaria by 11 p.m.

All throughout, Owwa has been assisting them even providing "house parents" assigned to assist with regards to medical services and transport needs given the strict quarantine protocols.

The Owwa house parent also accompanied them to the airport for their flight home.

“Handling of repatriated OFWs/non-OFWs who arrive here are coordinated through the Davao One Stop Shop (OSS) headed by Ms. Generose Tecson of the City Tourism Operations Office (CTOO),” Sarabillo said.

James arrived in Davao to assist his wife evening of August 21 after getting his negative reverse transcription-polymerase chain reaction (RT-PCR) result. He was booked by Owwa in a separate room at Acacia Hotel. The couple was placed in one room only after Joy Ann completed her 14-day quarantine five days later.

All throughout, the agency was administering to the couple’s needs without fanfare. The same with the SPMC and the hotel staff, which Joy Ann and James said were all friendly and helpful.

“People are friendly. Those from Owwa, the hotel staff, even the nurses in SPMC who were very happy because they said my babies were born on Kadayawan. I didn’t have any idea what Kadayawan was,” Joy Ann said in Tagalog. For 2021, the Kadayawan sa Davao Festival celebrated every third week of August opened on August 20, and thus Ella and Elle were dubbed the Kadayawan babies.

Both Joy Ann and James are first-timers in Davao and had no idea what it looks like until this fateful repatriation flight on August 11 and all they witnessed from the confines of their hotel and hospital rooms were cheerfulness and helpfulness.

Joy Ann even got the surprise of her life when staff from the CTOO brought two infant bags full of baby needs with cards saying, “From the People of Davao City.”