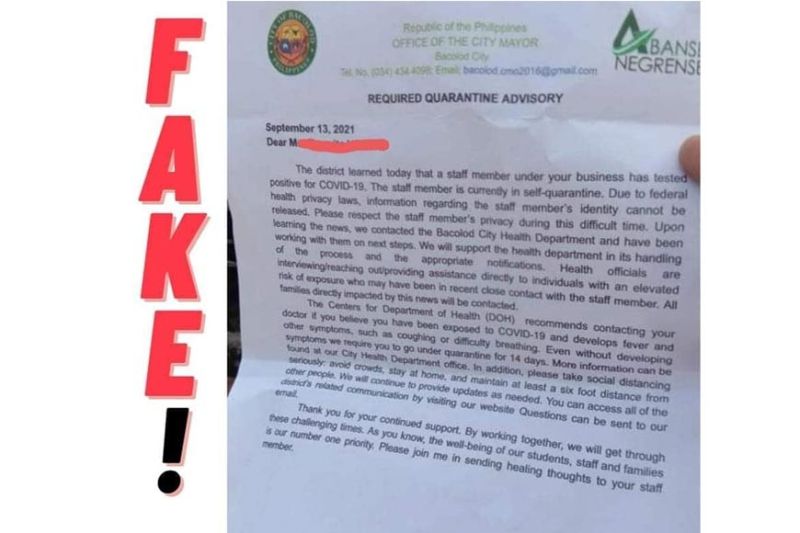 BACOLOD. The fake letter sent to a household at Barangay Taculing in Bacolod City before it was sealed off on Saturday, September 17. (Contributed photo)

THE Bacolod City Emergency Operation Center-Task Force (EOC-TF) has warned the public against unscrupulous individuals who are pretending to be government employees and engaged in sealing off residences of alleged coronavirus disease (Covid-19) patients.

Ang said one of the members of the household was allegedly infected by the virus.

"The family was obviously distressed and immediately called up the barangay," she added.

The residence was sealed off using caution tape with a quarantine advisory and a printed logo of the City Government of Bacolod on the left side and Abanse Negrense on the right side.

“The undersigned letter itself screams fake. It even mentions federal policy, so it obviously was just copied from some online article,” Ang said.

She lamented that some people have the guts to carry out such despicable acts of deceit, causing undue stress and anxiety to unsuspecting victims in this time of the pandemic.

The EOC chief added that these individuals are taking "pranks" to a new level of viciousness.

Ang stressed that "at a time when we are facing a serious public health crisis, it is unacceptable that some people use this for their own entertainment or worse, some sick perversion."

"Everyone must cooperate in our fight to stop Covid-19 from further affecting our city, and refrain from causing more panic and confusion," she said.

Those who will experience the same scenario are urged to contact the emergency hotline at 432-3879 or report to the nearest police station or barangay hall.