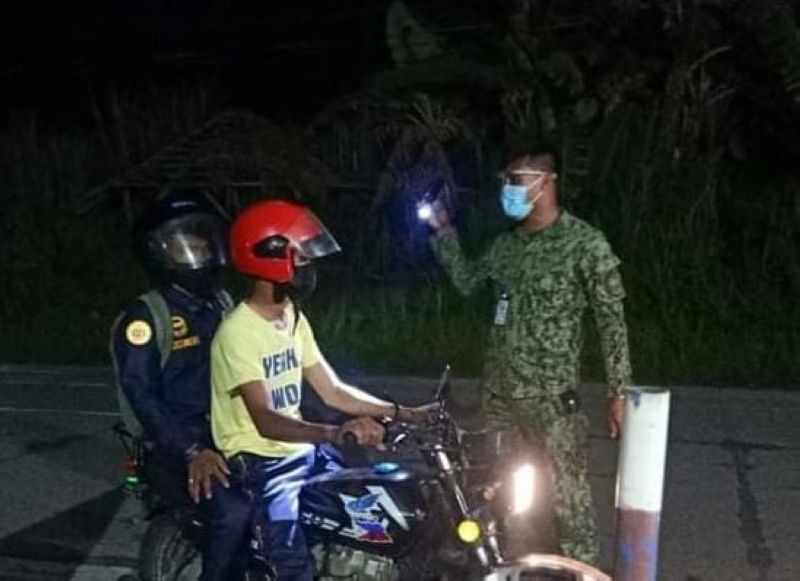 BACOLOD. A policeman conducts a checkpoint during the curfew hours in Bacolod City. (Contributed photo)

THE number of health protocol violators in Bacolod City has reached 36,718 as of September 12, 2021, records from the Operations Branch of the Bacolod City Police Office (BCPO) showed.

Police Lieutenant Colonel Lester Leada, head of BCPO's Operations Branch, said improper or failure to wear face masks topped the number of violators with 11,851, followed by those who disobeyed the curfew ordinance, and those who refused to wear face shields at 9,103 and 7,789, respectively.

He said 4,570 were caught for violating the liquor ban, while 3,405 were not following the social distancing protocol of at least a meter distance.

Sammy Montoyo, head of Task Force Disiplina, earlier vowed that they will continue to arrest and reprimand those who continue to defy the health protocols in the city.

Montoyo noted that people at markets, small eateries and coffee shops are usually those who disobey the protocols, such as not observing social distancing and the proper use of face masks.

As to the wearing of face shields, under City Ordinance 944, it should only be used in enclosed places or while riding in public utility vehicles, he said.

Health protocol violators were not taken into custody but were given citation tickets and warnings.

Those caught are fined P200 each if they are from Bacolod City and P300 for out-of-towners.