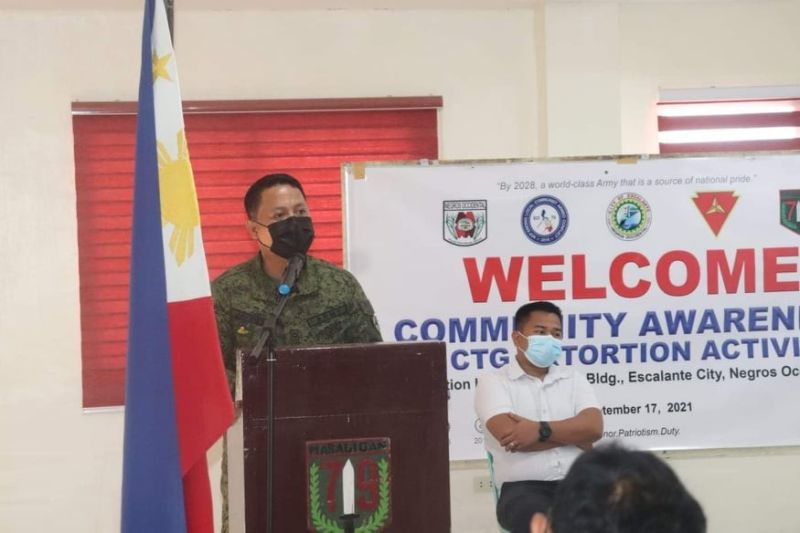 A pledge of commitment was signed by residents of Barangay Balintawak in Escalante City, Negros Occidental on Friday, September 17, to stop extending any assistance to the New People's Army (NPA).

The residents also reaffirmed their full support to the programs of the government to resolve and eradicate insurgency problems in their place and that of other areas in northern portion of the province.

The activity was attended by some 33 victims of rebel atrocities.

It was aimed at continually safeguarding the people from rebel's exploitation, to motivate them to be a productive, responsible, well-informed members of society as well as to be a partner in addressing the insurgency issues in the province, the army's press statement said.

Escalante Mayor Melecio Yap, in his message, challenged his constituents to reject and stop giving support to the CNTs and its allied organizations so that peace and progress may continue to flourish in the city.

For his part, 79IB commanding officer Lieutenant Colonel J-jay Javines stressed that this initiative is a part of the implementation of Executive Order No. 70 which is to counter the rebel's recruitment and extortion activities in the city.

“We will continue to do our tasks and joint endeavors inspired by the spirit of bayanihan,” Javines said.

"Under EO 70 or the Whole-of-Nation approach in ending local communist armed conflict, I encourage everyone to take their fair share of responsibility in resolving insurgency," he said, adding that "every sector of our society plays a vital role in this effort." (TDE)