On this day in 1972, Martial Law was declared and democracy ended 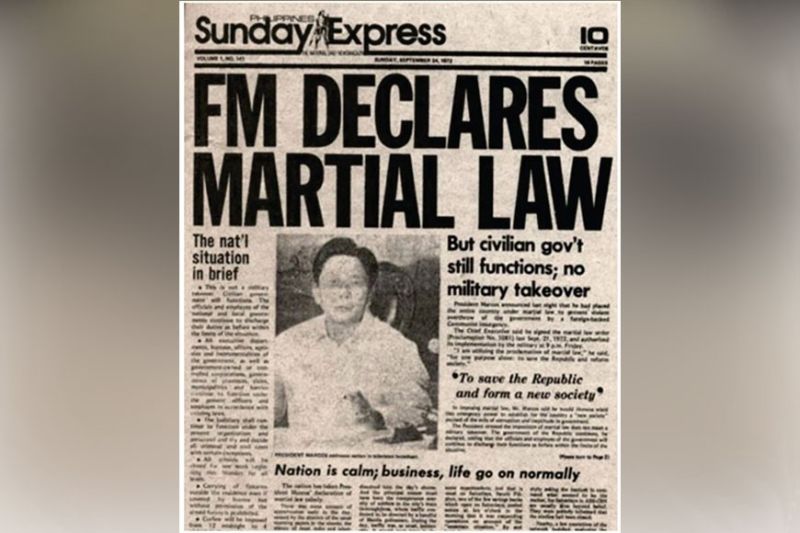 When Marcos appeared on television at 7:15 p.m. on Sept. 23, 1972 to announce that he had placed the “entire Philippines under Martial Law,” he framed his announcement in legalistic terms that were untrue. This helped camouflage the true nature of his act to this day: It was nothing less than a self-coup.

The pretext for Martial Law was provided on September 22, 1972. The convoy of Secretary of Defense Juan Ponce Enrile was ambushed in Wack-Wack as he was on his way home to Dasmariñas Village in Makati before 9 p.m. This ambush, as Enrile later revealed in 1986, was staged by Marcos to justify Martial Law.

Personalities considered threats to Marcos were rounded up, starting with the arrest of Sen. Benigno Aquino Jr. at midnight on Sept. 22, and going into the early morning hours of Sept. 23, when 100 of the 400 personalities targeted for arrest were already detained in Camp Crame by 4 a.m. In the meantime, the military had shut down mass media, flights were canceled, and incoming overseas calls were prohibited. Marcos would subsequently issue General Order No. 1, s. 1972, transferring all powers to the President who was to rule by decree.

Marcos was ousted in the 1986 People Power Revolution.

Today, the 1987 Constitution safeguards our institutions from a repeat of Marcos’ Martial Law regime. The Supreme Court is empowered to review all official acts to determine if there has been grave abuse of discretion. Congress cannot be padlocked. Martial Law is limited in duration and effects, even if contemplated by a President. (OFFICIAL GAZETTE)