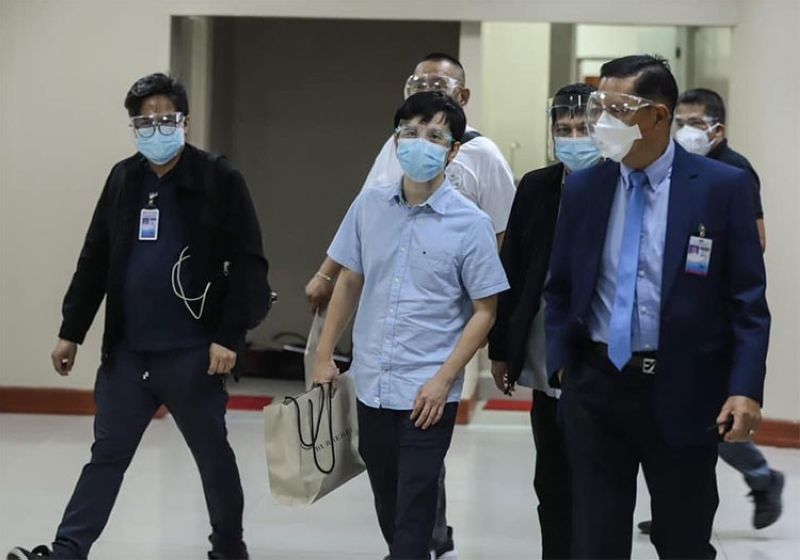 THE Senate detained on Tuesday, September 21, 2021, the director of Pharmally Pharmaceuticals Inc. amid investigation on alleged irregularities in the use of government’s Covid-19 response funds.

Pharmally director Linconn Ong was picked up by Senate Sergeant-at-Arms personnel in his house in Manila where he was under house arrest also over the orders of the Senate.

He was brought to the Senate office in Pasay City.

Ong’s arrest came when Senate President Vicente Sotto III reminded that his arrest warrant remains standing after senators were irked by his unclear and evasive answers to the questions, particularly those pertaining to the company’s financial documents and its dealings with other companies for the delivery of 500,000 pieces of face masks to the Procurement Service (PS) of the Department of Budget and Management (DBM).

The Senate blue ribbon committee, which is conducting investigation on the matter, earlier subpoenaed Pharmally to submit the company’s financial records.

On September 7, the Senate issued an arrest warrant against Ong, as well Michael Yang and other Pharmally officials, namely, Twinkle Dargani, Mohit Dargani, Krizle Grace Mago and Justine Garado, after they failed to heed to the summon to attend the probe twice in order to shed light on the matter.

Ong, however, was placed on house arrest since he was suffering from coronavirus infection.

The arrest warrant against the other persons has yet to be implemented.

The investigation seeks to clarify the Commission on Audit (COA) report where it flagged the DOH’s management of its Covid-19 funds.

This includes the P42 billion that was transferred by the DOH to PS for the procurement of medical supplies at the onset of Covid-19 pandemic.

Pharmally got the biggest chunk of the funds after bagging an P8.68- billion contract from PS for the delivery of face masks, personal protective equipment (PPE) and Covid-19 test kits which the lawmakers tagged as “overpriced.”

The senators insinuated that Pharmally was “favored” due to its link with Yang, the former presidential adviser for economic affairs. (SunStar Philippines)