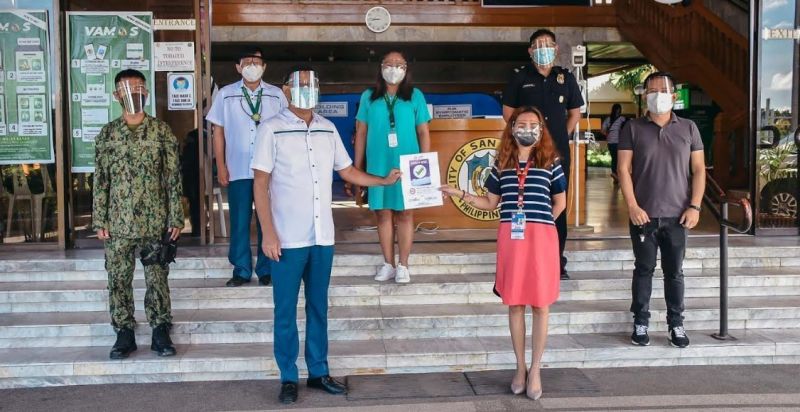 NEGROS. The San Carlos City Hall obtains a safety seal certification from the Department of the Interior and Local Government on September 21, 2021. (Contributed Photo)

THE San Carlos City Hall obtained the Safety Seal Certificate from the Department of the Interior and Local Government (DILG) on Tuesday, September 21.

City Local Government Operations Officer Danille Marie Osorio, in a statement, said the seal serves as proof that the local government, particularly its city hall where government transactions take place, is following the health protocols set by the national government.

Osorio said that if an establishment is safety seal certified, the employees feel safer and secure while in the workplace as well as the clients they serve.

“The seal helps the government in its bid to slowly open the economy as people will be confident that their health and safety are ensured while doing business at the city hall or any other establishments,” she added.

The City Government complied with the requirements in obtaining safety seal certificate, including 14 parameters assessed by the DILG, Bureau of Fire Protection (BFP), and Philippine National Police (PNP).

The San Carlos City Hall is the sixth government establishment in the city that has been certified.

Others are the BFP, city hospital, PNP, City Health Office, and Bureau of Jail Management and Penology (BJMP).

The City Disaster Risk Reduction and Management Office and public market have just applied for the safety sea certification.