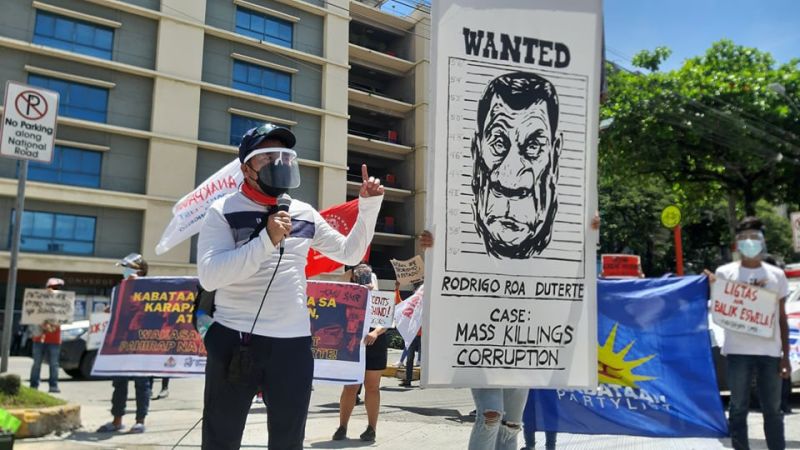 "Duterte, just like Marcos, killed thousands of Filipino[s] to silence the dissent of the people. They both implement Martial Law. To legalize his actions, he weaponizes the law to justify killings of the people who are pushing for legitimate demands such as land, regular work, better wages, and social services. Now, under the pandemic, despite his inutile response, he utilized the Covid[-19] protocols to hamlet the people while he greedily pockets the peoples’ money," Bagong Alyansang Makabayan-Southern Mindanao Region (Bayan-SMR) spokesperson Rodne Baslot said in a press release in line with the 49th anniversary of Martial Law declaration.

He also took a swipe at the current administration's Covid-19 response, including the corruption issues at PhilHealth, Bureau of Customs, and other government agencies, which "are likewise reminiscent of Marcos’ corrupt government at present."

Various organizations under Bayan-SMR staged a protest on Tuesday, September 21, along Roxas Avenue in Davao City.

The group, during their protest, recalled the "atrocities" done by Marcos to the people, which they said is "currently mirrored" by the Duterte administration.

Baslot said the police and military "are using health protocols as an excuse to hinder protests and mobilizations" in the city.

"In Davao City, we are just shifting from GCQ to MECQ to GCQ with heightened restrictions and so on. It has been a cycle. However, despite these restrictions, the number of cases is not decreasing. This clearly shows that the government response is utterly failing. There is not even enough aid or ayuda which is vital to at least lessen the impact of worsening poverty," Dizon said.

He also criticized the government's "misplaced priorities" as they increased the Department of Transportation's (DOTr) budget from P63.9 billion to P127.6 billion mainly for large railway projects, while the Covid-19-related budget for aid or assistance decreased from P239.3 billion under Bayanihan 1 to P22.8 billion under Bayanihan 2.

Kraft said the group was not allowed to stage a protest at the Freedom Park as mass gatherings such as protests are prohibited as the city is currently under general community quarantine (GCQ) with heightened restrictions.

"Enforcer po tayo eh. Sumusunod lang tayo sa policy ng ating government. (We are just enforcing the policy. We are only abiding by the policy of the government)," he told SunStar Davao in a phone interview.

On September 21, 1972, Marcos inked Proclamation 1081, which placed the entire Philippines under Martial Law.

Two days after, September 23, at 7:15 p.m., he appeared on television to formally announce the implementation of martial law. He cited the increasing threat of communism to justify the declaration.