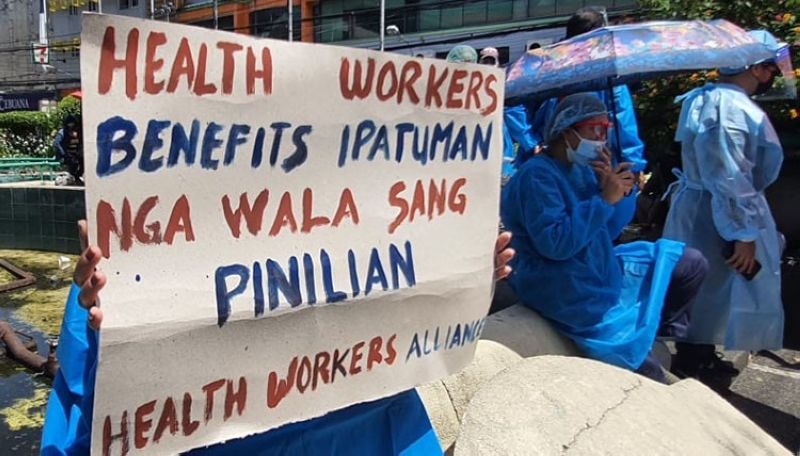 Some health workers join the picket at the Fountain of Justice in Bacolod City yesterday, September 21, to call for the release of their benefits. (Contributed photo)

An exodus of medical workers abroad might be inevitable if the national government and the Department of Health (DOH) continue to ignore their plea to release their special risk allowance and other benefits.

Nurse Honelyn Casumpang, who joined her colleagues in the profession in staging a picket at the Fountain of Justice in Bacolod City yesterday, September 21, said many of them will opt to go abroad where benefits and salaries are much better.

Casumpang, who has been a nurse for 15 years, said many foreign countries are hiring Filipino health professionals like nurses.

She said that if the government wants to keep the health workers, then, they should look after their welfare and those of other frontliners who are working during this pandemic.

Casumpang also said that the benefits for health workers should be given equally whether they are from the public or private medical institutions.

During the protest, the health workers wore their personal protective equipment to dramatize their plight, they said.

They also said that they are already tired of waiting for their compensation for the services they rendered during the pandemic but to no avail.

Some medical health workers who joined the picket said that working during the pandemic has been a challenge for them especially when there were lockdowns last year.

They noted that they needed to wake up early to catch their service because there is no public transport, and others got infected with the virus.

Noli Rosales, coordinator of the National Labor Union and one of the convenors of the Medical Front Liners Alliance of Negros (MFLAN), said many health workers are no longer interested in applying in local hospitals.

It is an indication that they could no longer bear the situation, Rosales said on the sidelines of the protest.

For him, the government has been “inutile” because of their slow response to the pandemic especially in extending the help to health workers who are in the front line amidst this challenging times.

“They are martyrs and heroes only in words,” Rosales lamented, adding that “however, the benefits that they deserve was not given to them” “We cannot blame them if they resign,” he said.

Bacolod Councilor Wilsom Gamboa, chairman of the Sangguniang Panglungsod committee on Human Rights, who was at the protest, said he will pass a resolution requesting Mayor Evelio Leonardia to look into the health worker’s plight.

Leonardia, in a statement, said he had already sent a letter to the Department of Health (DOH) in Western Visayas whose assistance he sought to hire more nurses and other medical frontliners to attend to Covid-19 cases.

"We are still awaiting the DOH's reply to our request regarding additional health workers. We also asked the health department for machines and equipment such as ventilators," Leonardia, said.

He also said that he does not have the absolute number on the actual shortage of health workers but pointed out that with 275 beds allotted for Covid in various hospitals, only 230 personnel are available for now. (APN)