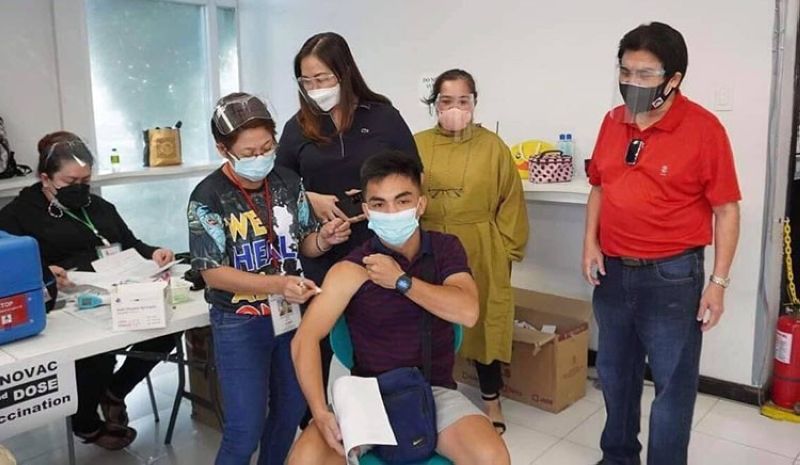 Major Evelio Leonardia encourages the public anew to have themselves vaccinated against Covid-19. (Contributed Photo)

Dr. Chris Sorongon, deputy for medical data and analysis of EOC-TF, said that of this number, 63 were unvaccinated against coronavirus Covid-19.

“So far, this is the highest record of deaths in Bacolod, he said.

Of which, 16, 418 have already recovered while 426 died, EOC records further showed.

Sorongon said they are now working on the preparation of the midway facility in Barangay Alijis to accommodate the Covid-19 patients.

“Most of our hospitals already reached the maximum bed capacity for Covid-19 patients so we need to double our efforts to accommodate all the Covid patients, some of whom are on the waiting list,” he said.

Sorongon explained that they could not make a referral outside the city’s hospital because they don’t have access to the One Hospital Command System of the provincial government.

Leonardia, in a statement, said the Covid-19 infections in Bacolod City are at 100.38 percent per day for this month.

Leonardia said the current rise in the infection was compensated by the fact that during the last two months, the Department of Health (DOH) and the EOC noted a slowdown in infections with daily cases averaging at only 41 cases.

"Although we don’t have an official word from DOH yet, it’s already the Delta variant in action", he added.

The mayor noted that the hospital occupancy has already reached a critical level, at 87 percent.

Leonardia said the local government had been meeting with hospitals regarding the matter.

Moreover, the ECO-TF also assured that Bacolod City still has enough supply of oxygen for the patients admitted to the hospitals.

Sorongon said that Leonardia already called the owners of the supplier of oxygen in Cebu and he was assured that they will be sending more oxygen in the city for medical purposes.

He said City Administrator Em Ang, who is the EOC director, will submit a proposal to the city council for a possible ordinance pertinent to hoarding, proliferation, and selling of oxygen in the city.

“For now, we still have enough oxygen and we are coordinating with various hospitals,” he added.

Moreover, Sorongon said they are still waiting for the response of DOH-Western Visayas for the augmentation of healthcare workers in Bacolod as well as the additional purchase of mechanical ventilators for Bacolod. (MAP)