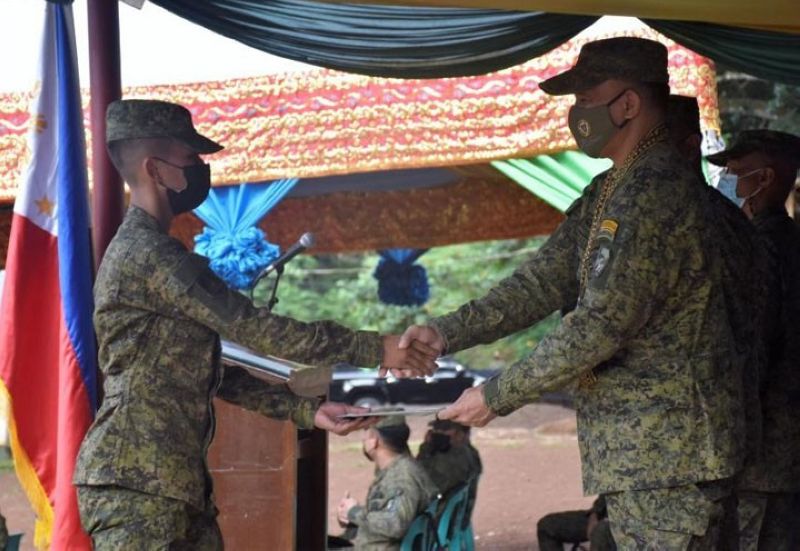 She is Private Nerna T. Arip, from Kaha vilalge, Parang, Sulu. She graduated number one of their class with a general average of 95.50 percent.

(First of all, I am grateful to the 11th ID for giving us this opportunity. I did not seek to lead but because of my dedication and desire to continue what my father left behind, I want to continue what he started. I also want to serve, especially here in Sulu, to keep the peace and now, that it is gradually improving. For dreamers like me, to go on and not give up on life is our real weapon in any battle.)

Private Awie J. Mohammad, who is also a Tausug, got the highest rating in the Physical Fitness Test (Tarzan) with a general average of 97.78 percent.

Gonzales extended his gratitude to the staff, training directorate, family and the new members of the 11th Infantry "Alakdan" Division.

(Your graduation does not mean that your suffering is over. Attached to power is great responsibility. For us, this responsibility is our duty for our town to protect the people and the area under its jurisdiction, particularly here in the province of Sulu.)

Doctolero said they comprised 234 males and 11 females. Nine are from Luzon, four are from Visayas, 66 are from mainland Mindanao, and 166 are from Sulu.

The orientation course is a requirement they should comply with before they will be deployed to line units of the 11th Infantry Division. (SunStar Zamboanga)