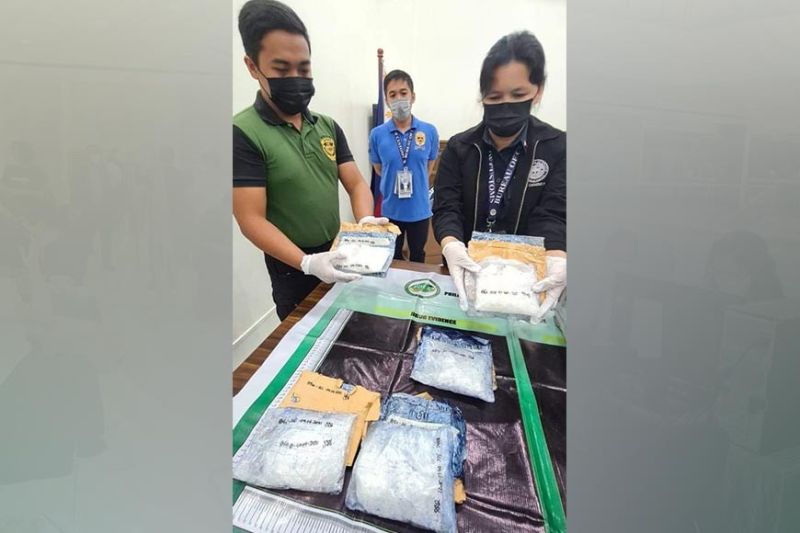 SEIZED SHABU. Agents of PDEA and BOC Port of Clark inspect the one kilo of shabu worth P7.4 million intercepted at the Clark International Airport. (Chris Navarro)

THE Bureau of Customs-Port of Clark, in close coordination with the Philippine Drug Enforcement Agency (PDEA), Enforcement and Security Service Customs Police Division (ESS-CPD), Customs Anti-Illegal Drug Task Force (CAIDTF)-Clark, continues to intensify its vigilance against illegal drugs with the confiscation of P7.4 million worth of shabu at the Clark airport.

The said operation is mandated and consistent with President Rodrigo Duterte’s fight against illegal drugs and Commissioner Rey Leonardo Guerrero’s anti-illegal drugs campaign as authorities seized 1.1 kilograms of methamphetamine hydrochloride (shabu) with an estimated value of P7,480,000 found in a shipment declared as “flask” from Lilongwe, Malawi.

Through the joint effort and coordination of the Port with ESS-CPD, CAIDTF and PDEA, the shipment was immediately put on hold and subjected to x-ray inspection upon receipt of reliable information that the same allegedly contains illegal drugs on September 14, 2021.

The x-ray scanning resulted in images of organic substances and therefore subjected to physical examination, which revealed five packs of crystalline substances suspected to be shabu concealed inside two units of Electric Air Pot Flask. Samples were taken for the conduct of laboratory analysis that confirmed the same as methamphetamine hydrochloride.

District Collector Alexandra Lumontad issued a Warrant of Seizure and Detention against the subject shipment for violation of Section 118 (g), 119 (d) and 1113 par. f & l (3 & 4) of R.A. 10863 otherwise known as the Customs Modernization and Tariff Act (CMTA) in relation to R.A. 9165 otherwise known as the Comprehensive Dangerous Drugs Act of 2002.

On September 15, 2021, the subject illegal drugs were turned over to the PDEA pursuant to Customs Administrative Order No. 03-2020.

In a press statement, Lumontad said that the Port of Clark will further intensify its effort against illegal drugs through consistent coordination with PDEA and CAIDTF, strict profiling of shipments and maximizing the use of x-ray machines considering the manner of concealment in the previous drug seizures.

It may be recalled that the Port of Clark previously uncovered illegal drugs inside shipments of air fryers and security cameras.

With the recent drug apprehensions, the Port of Clark remains committed to Guerrero’s anti-illegal drugs campaign and will continuously support the continuing war of Duterte against prohibited drugs.