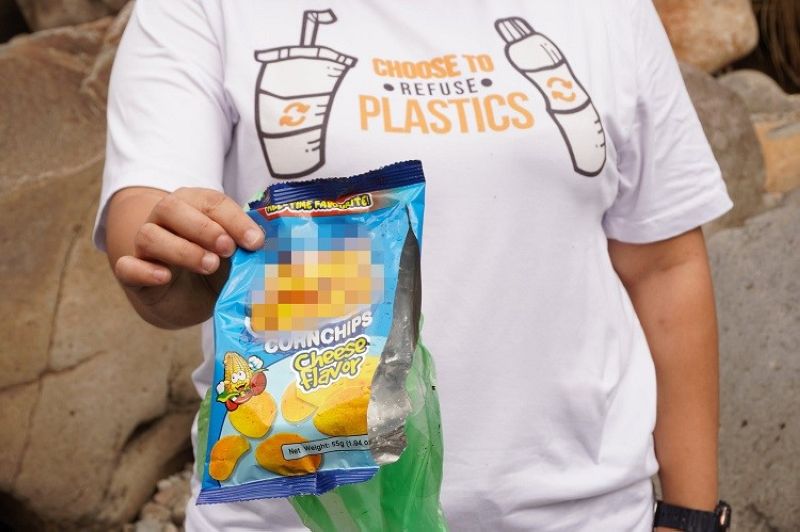 DAVAO. Volunteers picked up pieces of plastics and other waste materials during the four-day waste and brand audit at the Panigan River in Barangay Tawan-Tawan, and Carmen, Lower Tamugan River in Barangay Gumalang, and Davao River in Barangay San Rafael last August 20, August 27, September 3, and September 10, respectively. Idis urged the public to reduce consumption of plastic following the passage of the Single Use Plastic Ordinance in Davao City in March 2021. (Photo courtesy of Idis)

A DAVAO-BASED environmental group is calling the attention of top brand companies that were tagged as "top polluters" of the rivers in Davao City, after they collected 3,704 pieces of mixed waste during a four-day waste and brand audit at the city's watershed areas.

Based on the data of the overall classification of collected wastes, categorized as non-biodegradable wastes such as plastic wrappers, bags, bottles, glass, and special wastes such as facemasks and used materials were collected.

A total of 1,518 pieces of food wrappers or packaging of junk food, biscuits and other packed snacks comprise 41 percent of the total waste collected. Plastic bags, pieces of cellophane and sacks took the second spot with 15 percent or 553 pieces.

A total of 183 disposable face masks were collected, which comprise five of the total data.

The group said the "lower percentile (1 to 2 percent) is composed of other residual wastes that include, among others, used clothes, glass bottles, tin cans, disposable diapers and napkins, cigarette buds, and deflated balloons."

Idis said based on their data, the types of wastes collected and brand/manufacturer showed that majority of the wastes found were from food packaging and related sources.

"Through a Cross-Check Analysis of both datasets, eight out of the top 10 manufacturers are food packaging and production-related companies," the group said.

Prifood Corporation, a company behind leading junk foods in the country, ranked third on the brand audit. On the other hand, Universal Robina, another top producer of junk foods is fourth on the list.

The group said results of the 2020 audit revealed almost the same companies in the top 10 Ranking. Though there is a slight difference in the brand ranking, this still means that these are the top brands generating the most plastic waste that pollutes our rivers.

Idis and Bantay Bukid Volunteers said the companies should start shifting from "throwaway packaging models to more sustainable reuse and refill systems and mainstream other community-based working models that aim to end dependence on single-use plastics."

They also urge the public to manage their wastes properly and avoid using single-use plastics.

Idis Executive Director Mark Pe�alver said in a statement that they are alarmed with the number of wastes collected in the watersheds, which is considered as the city's water source.

"With these data, we are alarmed by how we manage our wastes and by how we strongly implement or follow our laws," Pe�alver said in a statement.

The Panigan-Tamugan Watershed is one of the most important watersheds in Davao City since it will soon supply the needed water for the Dabawenyos. At present, Apo Agua Infrastructura, Inc. and the Davao City Water District are in the middle of the construction of the P12.6-billion Davao City Bulk Water Supply Project (DCBWSP). Its main source is the Tamugan River.

Pe�alver, meanwhile, lauded the 19th City Council for passing two ordinances that would help in addressing waste problems this year -- the "No to single-use plastic" ordinance and the ordinance regulating recreational activities in the watersheds.

He also urged barangay officials to strictly monitor their jurisdictions and enforce their mandate under existing laws.

"How they manage their waste problem also reflects how they lead their respective barangay. Most importantly, these areas are critical to the future of Davao City-Panigan-Tamugan watershed being the next source of drinking water of the city," he said.