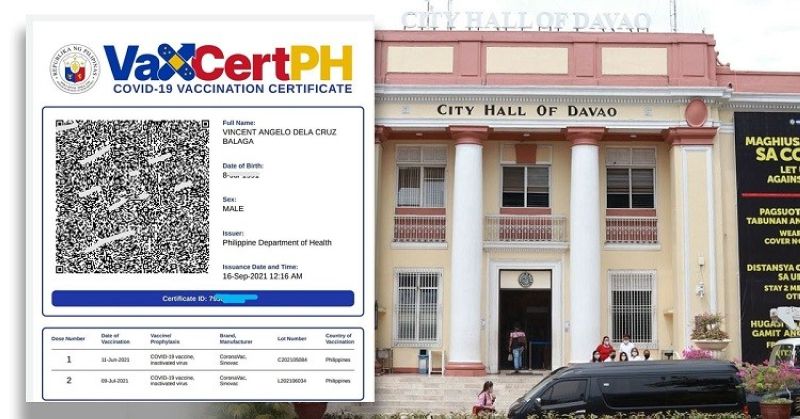 THE Davao City Government will soon be rolling out vaccination certificates online.

Covid-19 Task Force Spokesperson Dr. Michelle Schlosser said in a radio interview that fully vaccinated Dabawenyos will soon be able to secure digital vaccination certificates as the national government targets to roll out the Covid-19 Vaccination Certificate or VaxCertPH program, an online portal, on September 30 to other regions.

Schlosser said after the soft-launching of the VaxCertPH program in Metro Manila and Baguio City, which was initially available only to overseas Filipino workers (OFWs) and foreign travelers, the national government is set to launch it in other areas, including Davao City.

(The vaccination certificates are very important when you travel abroad, especially for OFWs. Some countries are requiring travelers to be fully vaccinated. That's the main purpose of the certificates.)

She added that the local government aims to provide an accessible online platform for travelers and non-travelers.

The official said the City Government, through the City Information Technology Center (CITC), is coordinating with the national government for the launching of the program nationwide.

According to the Davao City Vaccination data as of September 21, there were a total of 536,198 fully vaccinated Dabawenyos, while 702,170 already received their first dose.

The City Government targets to inoculate around 1.2 million of the city's 1.8 million population.

The vaccination certificate is purposely for those who are planning to travel abroad, as countries are now requiring people entering their country to be fully vaccinated. The certificate will serve as proof that an individual has completed the required doses.

Schlosser said the unified digital certificate will address the rampant faking of vaccination cards, as it indicates a unique nine-digit number that stands as the Certificate identification number.

It also contains the individual's personal information and the holder's vaccination status.

Mayor Sara Duterte-Carpio said in a radio interview on Monday, September 20, that the city is working hand-in-hand with the DITC to iron out the program before it can be made available to the general public.

(There is a second pilot for the VaxCertPH and Davao City is part of it. Our CITC is working with the DICT for this)

Meanwhile, the mayor said the vaccination cards will not be the primary basis that a certain individual is vaccinated or not, as important details will reflect on the government's database. (RGL with reports from CIO)