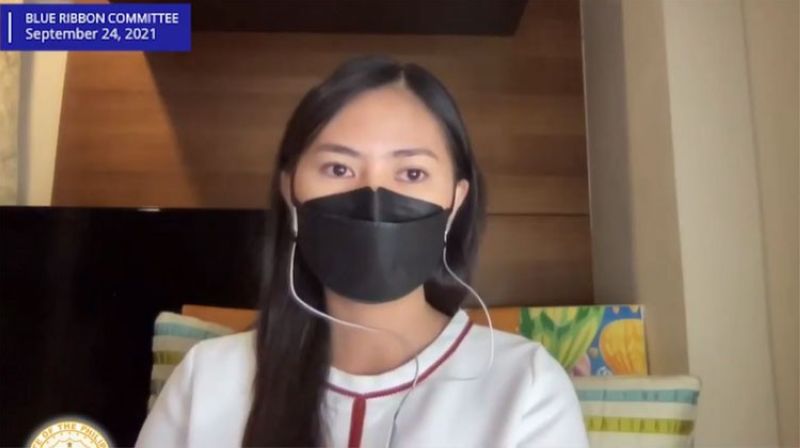 AN EMPLOYEE of the embattled Pharmally Pharmaceuticals Inc. told the Senate Friday, September 24, that she thinks the firm “swindled” the government particularly in the procurement of face shields that were distributed to medical frontliners amid the Covid-19 pandemic.

Pharmally administrative assistant Krizle Grace Mago confirmed the statement of a witness, who was a warehouse employee of Pharmally, that she instructed them to replace the product certificate attached to face shields to be delivered to the Department of Health (DOH) to make it appear that they were produced in 2021.

The witness, who was presented by Senator Risa Hontiveros during the resumption of the Senate blue ribbon committee investigation on the deficiencies in the use of Covid-19 funds by the DOH on Friday, said when the face shields came in to them, the product certificate indicates that they were manufactured in 2020.

The witness, whose identity was not revealed for security reasons, said Pharmally supplied the DOH with “expired” and “substandard” face shields.

He said they will repack each face shield intended for doctors and nurses without protective gears such as gloves.

He said there is no such thing as rejected stocks despite the physical appearance of the supplies.

Mago said it was “something that I cannot deny,” noting she got the order to give such an instruction from Pharmally treasurer Mohit Dargani.

But Dargani denied giving out the order to Mago.

Mago, for her part, stood by her statement, saying she was an employee who always has to follow instructions.

Pharmally has been in hot water for being the “favored” supplier of the Procurement Service (PS) of the Department of Budget and Management (DBM), which was tapped by the DOH to facilitate the procurement of medical supplies worth P42 billion.

The firm bagged over P8 billion worth of contracts from PS. Lawmakers said the medical supplies bought by PS from Pharmally on behalf of the DOH were “overpriced.”

It was uncovered during the probe, which was under attack by President Rodrigo Duterte, that Pharmally has links with former presidential adviser for economic affairs Michael Yang.

Gordon cited that the first batch of medical-grade surgical face masks, which consists of 500,000 pieces ordered by PS from Pharmally, went through three layers.

Senator Panfilo Lacson shot down the defense of former PS head Christopher Lloyd Lao that there was a scarcity of supply of medical supplies during the onset of Covid-19 pandemic and it was only the Pharmally who could provide them the supplies.

It was revealed in the recent hearing that Pharmally was able to deliver the 500,000 pieces of face masks to PS the same day they received the request for quotation. (SunStar Philippines)