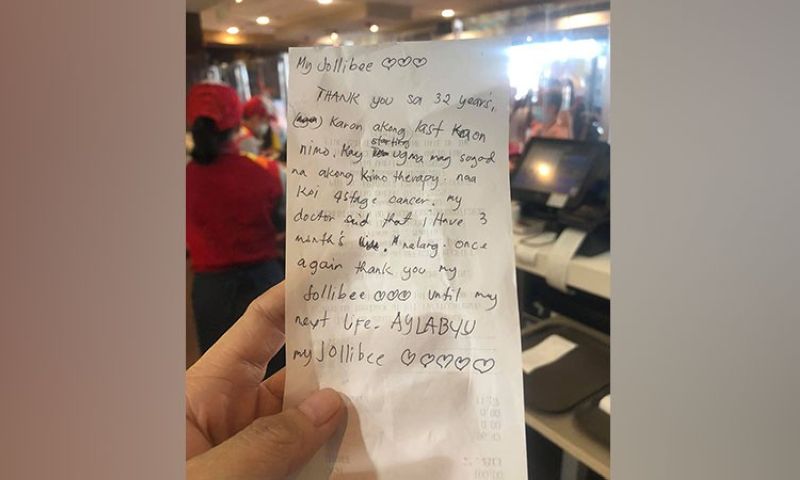 A MANAGER of Jollibee Countrymall branch in Cebu City took to Facebook Friday, September 24, to share a story about a customer who wrote a “different thank you message” at the back of his receipt.

Mechelle Centurias, manager of Jollibee Countrymall, said on her Facebook post that based on the note written at the back of the receipt, the customer has Stage 4 cancer.

Stage 4 cancer, according to the American Society of Clinical Oncology, is also called advanced or metastatic cancer, which means that the cancer has spread to other organs or parts of the body.

It was not clear what type of cancer the customer has, but Centurias told SunStar that the incident happened Thursday, September 23.

Centurias said she could not hold her tears when she read the note. She even wrote on the comment section of her Facebook post that she checked the closed circuit television (CCTV) footage to see and identify the customer.

“I remembered how his eyes smiled when I called his number when his order was ready,” she said.

“I was told that feedback is a gift. But this one is a totally different gift. It hits me to the core.

“One of our guests at Jollibee left this note at the back of his receipt. After silently eating at one corner of the store, he cleaned up his table, brought the tray at the claim area and left. Our dining crew saw the note written on his receipt and gave it to me. I thought it was a feedback from a dissatisfied customer but it wasn’t. It was a different ‘thank you’ message from someone who had his last Jollibee meal before his Chemotherapy for stage 4 cancer. He was sharing that his doctor gave him 3 months to live.

“With a heavy heart, I immediately took the chance to look for the customer at the dining area but I was told he just left. I lost the chance of speaking to him and to give him thanks and encouragement.

“To this ‘brave someone’ who just prepared himself for a big fight, we pray for your recovery. The 3 months your doctor gave you can be 3 years or 3 decades or longer. God gives miracles. We just have to believe and strengthen our faith.

“I hope we’ve served you better and made you happy when you’re at Jollibee. Welabyu.”

Centurias’s post has already garnered 527 shares and 49 comments as of this posting Friday night, September 24.

The photo showing the customer's note was also shared on SunStar Cebu’s Facebook page and has so far garnered 1,000 shares just 20 minutes after it was posted.

Majority of the netizens who commented on the post offered their prayers to the “brave customer,” while others have said that while the message broke their hearts, it reminded them to not complain about life but be thankful every day.

Cancer has been one of the leading causes of morbidity and mortality worldwide, with nearly 10 million cancer-related deaths recorded in 2020, according to the World Health Organization.

In the Philippines, the Department of Health said it remains a national health priority and is the third leading cause of morbidity and mortality after diseases of the heart and the vascular system. (SunStar Philippines)