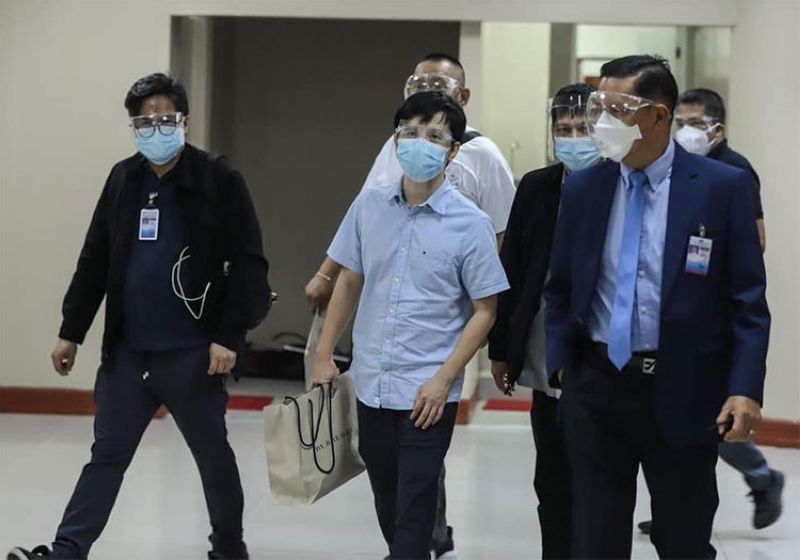 Gordon was irked when Ong told the committee he is not aware of the accounting records of the company.

“I am sick and tired of this,” Gordon said.

“You’re lying. You steal from our people. You’re gonna pay,” he added.

Ong is currently detained at the Senate office in Pasay City amid the Senate probe into irregularities in the use of pandemic funds released to the Department of Health (DOH) and which were flagged by the Commission on Audit (COA).

Earlier in the hearing, Senator Francis Pangilinan called to move for the transfer of Ong to the National Bilibid Prison (NBP) due to his repetitive refusal to say how much money former presidential adviser for economic affairs Michael Yang had lent Pharmally in order for it to fulfill its contract with the Procurement Service (PS) of the Department of Budget and Management for the delivery of medical supplies at the onset of the coronavirus disease 2019 (Covid-19) pandemic.

Ong kept on insisting that they have a non-disclosure agreement with Yang, compelling him to not discuss the matter.

He later said he could not recall the amount of money they borrowed from Yang.

“Mister chairman, perhaps, we should have him transferred to the New Bilibid Prison. Perhaps, there he would have the chance to reflect more on his answers kasi paiba-iba eh,” Pangilinan said.

“Mister Linconn Ong, I’m sorry, but clearly you are being evasive,” he added.

Pharmally owner Huang Tzu Yen earlier admitted that Yang lent them money to finance their transactions with PS, admitting they do not have enough funds to do so.

The firm bagged over P8 billion worth of contract from PS for the delivery of face masks, face shield, personal protective equipment and Covid-19 test kits.

“I join the motion of Senator Pangilinan, I second the motion to move Mr. Ong to the NBP, in view of his refusal to answer, bordering on perjury on a legitimate question, on a valid question that we raised,” he said.

Gordon said he is inclined to approve the motion but he gave Ong another chance and encouraged him to cooperate and tell the truth to avoid further trouble.

“I didn’t want you to go to jail but if you persist on this attitude, then I will have no recourse but to either put you in Bilibid or in the City of Pasay Jail which is nearer to the Senate,” he said.

“I must warn you, we’re trying to bend over backwards for you. You are just the patsy, the goffer, ginamit ka, bakit di ka tumulong? Kumampi ka sa Pilipinas di yan sa mga yan,” Gordon added.

Ong maintained he was cooperating in the probe. He turned emotional as he said he had a lot in mind.

Drilon asked Ong if he wanted to speak with them in an executive session but he said he wanted to confide with his lawyer first as he is not aware of the implication of it.

“If he tells us the truth and we are convinced that he is telling us the truth, we can have him, we can recommend him for admission to the witness protection program so that his testimonies cannot be used against him. But at the rate that he is going, he is giving us no choice but to put him somewhere else rather than the Senate premises,” Drilon said.

Ong revealed in the previous hearing that he has been receiving death threats after he faced the Senate inquiry.

The said company was the one that supplied the 500,000 face masks to TigerPhil, which on the other hand passed it on to Pharmally to be sold to PS.