'We made it partner' 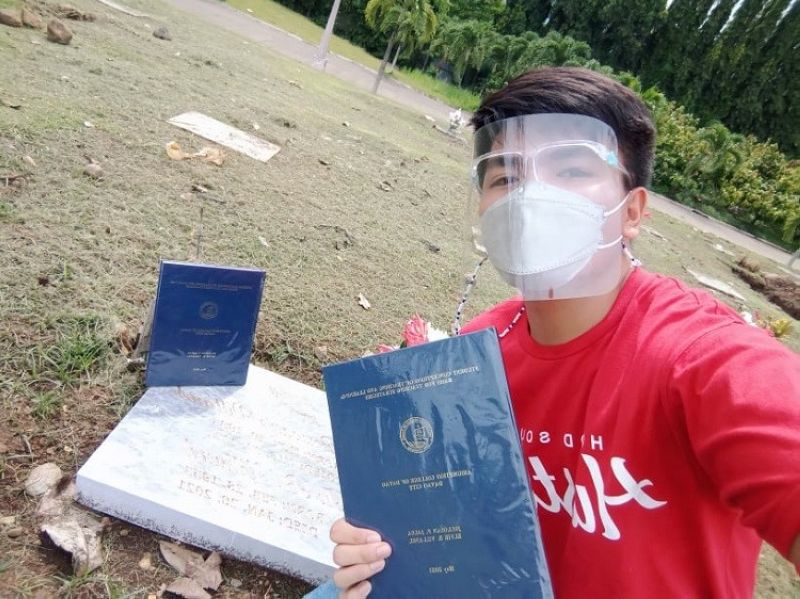 "WE MADE it partner."

This was Jello Jalea's caption of his 11 second-TikTok video, dancing to Earth, Wind & Fire's "Let's Groove" while holding two copies of a book-bound thesis report near a gravestone in early September 2021. It was a celebratory moment for him.

In his following posts, Jello introduced his thesis partner -- Elvie Villanel, who unfortunately died a month ago before they could finish their thesis.

In an interview with SunStar Davao, he shared that his post was a "tribute" to his thesis partner.

It was a bittersweet moment for Jello, who is set to graduate next year. This was a stepping stone towards achieving his dream of becoming a teacher. But that happiness is also met with sadness, as he is also faced with the hard reality that his "Ate Elvie" will not be able to fulfill her ambition.

He met his thesis partner in 2018. They were more than just thesis mates as they both shared the same dedication in finishing their studies while being working students.

During the day, Elvie worked as a security guard at the Assumption College of Davao. She had been a security guard for the last seven years. In the evening, she was a student at the same school.

Jello witnessed Elvie's dedication to being a working student and a mother of two at the same time.

(Aside from work, she also struggled to understand some of the subjects at school. There were times when she can't meet the requirements because it conflicted with her schedule. I really felt her struggle.)

Elvie was a great motivator, he said, as she would make sure that she can cope up with her studies.

Being a classmate for three years, Jello said Elvie, 37, had stood as a "mother figure" of the class.

Despite being the eldest in the class, he said Elvie was like a barkada as she has a cheerful and kind personality.

But just like any mother, she was a disciplinarian whenever the class gets too noisy.

When the Covid-19 pandemic struck, classes were migrated digitally.

Even when classes shifted to the "new normal," he said Elvie continued to check on him during her free time and reminded him of finishing his studies.

(She was like a mother to me at school. She was the person I go to if I have problems. She also encouraged me to continue to pursue my studies even though I am a working student.)

Just like any student, Elvie was also struggling with the new normal setting. But this did not hinder her from finishing their thesis.

He said their last conversation was on August 6. The next day, Elvie was allegedly killed by her live-in partner.

Jello was devastated by what happened to his Ate Elvie.

While he cannot recount the exact reason for the crime, he said it was allegedly due to jealousy. The suspect was reported to have also died days after committing the crime due to an alleged suicide.

During the wake, he made a promise to his partner that he would visit her once their thesis was done.

(I made a promise to her during her wake at their home in Marilog that I will visit her after.)

He made true his promise. Weeks after her death, he visited her, holding their hardbound thesis.

Jello said while he is slowly accepting the sudden passing of his partner, it has not sinked in how her life ended for a senseless reason. He said his partner still had many dreams in life that she would have reached, including becoming a brilliant teacher.

(It was her dream to finish her studies, have a degree, work as a teacher, and give her children a better future.)

Elvie may be gone, but he said the memories, words of wisdom and her story will definitely live on.

Thus, her story must be seen as a source of inspiration in pursuing your goals in life, no matter the circumstances.

(She valued education because she saw this as a way to improve her life.)

He also said he would continue to visit her.

(Even if it rained, I will still visit her and show her what we finished and how proud I am to have her as a partner.)

While Elvie was not able to witness the fruits of their labor in the end, Jello said they still made it together.

With this, he shares his success with the person who turned from a partner to a lifetime mentor.