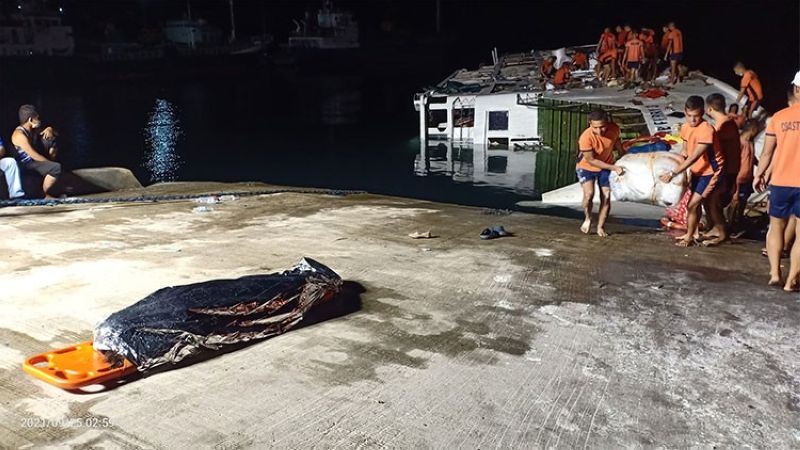 A FEMALE crew member died and 15 others were rescued after a passenger vessel of Danilo Lines Inc. sank “while conducting a docking maneuver” at Ormoc Port in Ormoc City, Leyte around 11:50 p.m. Friday, September 24, 2021.

The Philippine Coast Guard (PCG) identified the fatality as Raquel Alo, 33, M/V Lite Ferry 3’s purser who was trapped inside the vessel after it listed and sank. She was a resident of Balilihan, Bohol.

Alo’s body was retrieved around 3 a.m. Saturday, September 25. She was found pinned under several cargoes. Her body was brought to the Ormoc City Scene of the Crime Operatives and was transferred to a funeral parlor in Ormoc City around 5 a.m. Saturday.

The 15 survivors, meanwhile, were turned over to the Ormoc City Disaster Risk Reduction and Management Office for medical assistance.

One of those who survived was the vessel’s captain, who was advised to file a marine protest.

The PCG believed that M/V Lite Ferry 3 encountered big waves while on its way to Ormoc City, causing its cargoes to move.

It said it noticed the vessel was already listed on its starboard side (right) upon arrival at the Ormoc Port.

Danilo Lines Inc., in a Facebook post shared on Lite Shipping Corporation’s page, said it will deploy a replacement vessel Saturday to take the Cebu City to Ormoc City route.

“Danilo Lines Inc. regret to announce that one of its vessels, M/V Lite Ferry 3, encountered an incident at the Port of Ormoc City moments after its arrival at the said port. At the moment, the vessel is partially submerged in the water,” it said around 3 a.m. Saturday.

In August 2019, three passengers of M/V Lite Ferry 16, also owned by Danilo Lines Inc., died when fire broke out in the engine room of the passenger ferry as it traveled toward Dapitan City in Zamboanga del Norte.

The vessel was carrying 136 passengers and 40 crew members when it left the Samboan Port in Cebu. (LMY/JKDP)